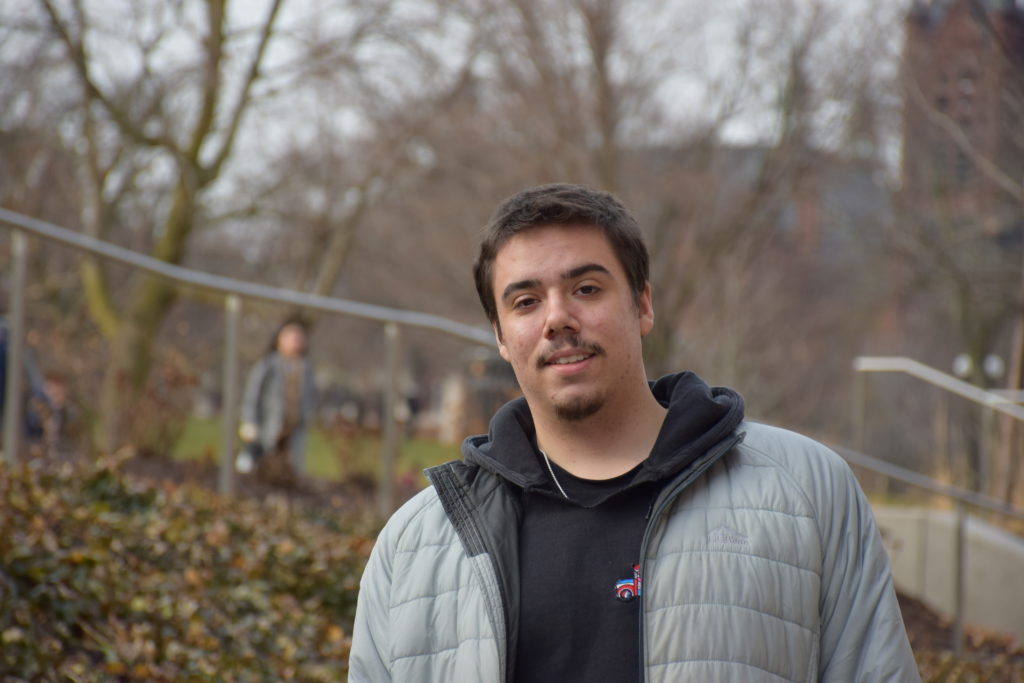 William Lee Mendes McKnight ‘18, Arts and Sciences major and founder of Farm to Flame Energy, is working to empower rural farmers by providing them with sustainable energy through a biomass combustion system that can be used to power micro-grids.  As the winner of the recent Syracuse University Hult Prize campus competition, he is about to take that message to a bigger stage when he heads to Boston in early March to pitch at the global regionals of the $1 million competition that is known as the Nobel Prize of student social entrepreneurship.

Working closely with his family, Will has been dedicated to this venture since he arrived on the Syracuse campus, almost four years ago. With the incredible goal of bringing sustainable energy solutions to areas of the world without reliable power, he is already partnering with farmers and energy entrepreneurs in African countries such as Liberia. He is literally building his dream, and expects to launch later this year.

Along the way, it has been a transformative journey for both Will and his venture.

Will evolved his original idea of a building a portable biomass heater into the larger concept of creating an integrated biomass combustion system to provide electricity to communities without reliable power sources.  Working with a patented technology originally developed by his grandfather, he is now building his own beta prototype with a goal of bringing it to community scale.  “As we grow together as a global community, no corner of the world should be left out,” says Will. “In the age of the technology, electricity has become a basic human right.  Our solution can help bring electricity to the 1.2 billion people around the world living in energy poverty by building a smokeless, odorless, biomass generator and community microgrid solution.  Best of all, our system leverages the power of locally available energy crops and agricultural waste to create energy entrepreneurs in developing countries.”

Farm to Flame does four things.

One of our its generators can power an entire village, or 32 average American households, and can also power commercial buildings or schools.  Most important, it will work with a wide range of feedstocks. Most biomass units can only use one feed stock such as rice husks or nut shells.  The Farm to Flame technology can use anything that is grown locally, including the agricultural was from feed stocks.  As long as it can be ground up to a fine powder, it can burn in a Farm to Flame generator.  A franchise model will enable Farm to Flame to engage and train local entrepreneurs on how to manage and maintain the system, as well as create community microgrid infrastructure to support it.

Will is already developing a network to bring his concept to market.  His venture is in discussion with the recently inaugurated President of Liberia George Weah, and he has developed an important partnership with Kivu Green Energy, a utilities company based in the Democratic Republic of Congo.  Kivu will be Farm to Flame’s first master franchisee and work with Will and his team to implement and manage solutions in other African nations. He is looking to develop more master franchise agreements like this, in other parts of Africa, and scaling to Asia and South America.

Will explained how focus and dedication helped develop his venture developed, and this approach transformed his entire work ethic and plans for the future.

He sees a future in which he is his own boss and brings change and empowerment to those that need it the most. Looking to build his own path while using technology to better the lives of those in this world that need it most, it is no surprise that a large component of the model is a strong agricultural education component.  His entrepreneurial drive grew as he became more and more involved in the research and outreach components of the venture.  As he realized the potential and true impact of commercializing his idea, Will took the original patented technology and has pursued a path to commercialization over the past four years of working on this project.

As part of his original customer discovery, speaking with people in the energy business, he saw a lack interest in generators as heat sources, and this important research helped changed the trajectory of the venture. He shifted towards the idea of a biomass generation system connected to a microgrid that could provide electricity rather than heat.  Those conversations, particularly with propane companies, showed his entrepreneurial capabilities to assess problems and pivot and iterate to build solutions that best matched needs and market opportunities.

By listening to the energy companies he met, and building relationships with them, he was able to build connections with others in countries in Africa, as well as the Liberian government, who are interested in working with him to introduce forms of renewable energy to rural farming communities in developing nations.

Always passionate about engineering and invention, Will has found a way to combine everything he loves to work towards something he believes in. True to his entrepreneurial nature, Will used his passion and dedication to ideate, do customer discovery, iterate, and develop a compelling business model and parth to market as he transformed the venture itself.

Along with his team members Kwaku Jyamif, an engineering student, and Sage Lasenberry, ESF student specializing on energy crops and agriculture, they will are competing in multiple business plan competitions this spring on the Syracuse University campus.  Beyond these competitions, Will will continue to pursue this venture after graduation and embrace all the transformations that it brings within and in the world around him.