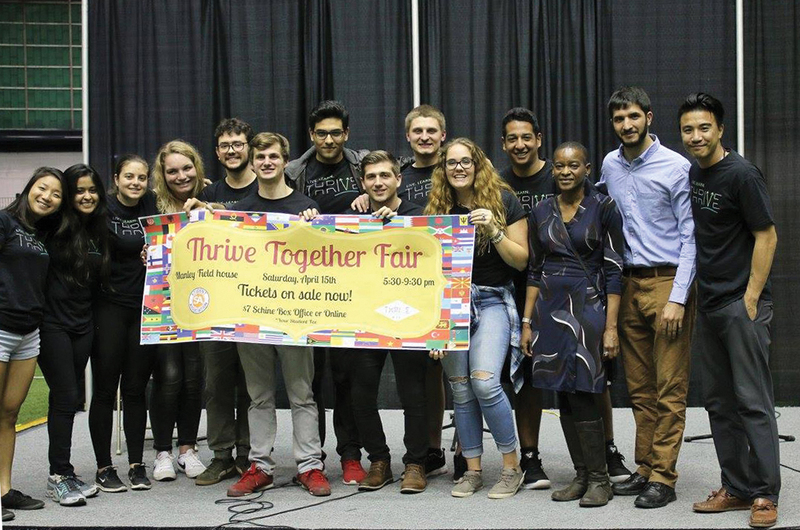 Thrive at SU, based out of the LaunchPad in Bird Library, is hosting its second annual Thrive Together Cultural Fair on Saturday, March 3 from 11 a.m. to 2 p.m. in Goldstein Auditorium in the Schine Student Center. Tickets are available at the Schine Box Office for $7, with all proceeds going to InterFaith Works’ Center for New Americans.

The fair will showcase foods and performances from cultures around the world. Olive Sephuma, director of the Center for New Americans at InterFaith Works, and graduate student Nada Odeh will speak at the event, sharing their experiences and discussing the organization.

As the collegiate-level affiliate of Thrive Projects, a nonprofit that works with underserved and vulnerable communities around the world, Thrive at SU firmly believes that the strength of Syracuse is rooted in both its diversity and sense of togetherness. Thrive at SU recognizes the important role that refugees play in the community and hopes this event “serves as a reminder that we are at our best when we face times of struggle together.”

The Blackstone LaunchPad looks forward to tabling at this event and supporting it.

Story below by Rabia Tanweer for this week’s Daily Orange

Despite the refugee population in Syracuse declining recently, displaced people who find themselves in central New York have several places they can turn to for help.

As a city that generally receives a large number of refugees, Syracuse experienced a dramatic change in 2017. Last year, the percentage of new refugees that came to the city decreased by 72 percent. This decline reflects the lowest number of new refugees in a decade.

InterFaith Works has made efforts to help arriving refugees establish themselves in Syracuse since it was established in 1976. Thrive at SU, an on-campus organization at Syracuse University, will partner with InterFaith Works next month to hold its second Thrive Together Fair.

The Center for New Americans, the branch of the organization that most directly helps resettled refugees, provides many services to help refugees, including picking them up from the airport, finding and furnishing initial apartments and helping them find employment and medical care.

InterFaith Works also aims to build understanding between people of different racial and religious backgrounds. It provides services to help refugees understand the culture, like providing English lessons and preparing them for citizenship tests.

The recent decline in incoming refugees has affected InterFaith Works and other organizations like it. President and CEO Beth Broadway said the agency has been settling refugees since 1990, and she hasn’t seen such low numbers in the time she’s been with the organization.

Broadway said President Donald Trump’s executive order in January 2017 regarding refugee admittance has affected InterFaith Works as well. The order banned refugees from Syria, suspended the refugee program for 120 days and decreased the limit of incoming refugees from 110,000 per year to 50,000, per The New York Times.

“Refugee organizations are, in a sense, being strangled due to travel bans,” she said.

Broadway said that by December 2016, 87 refugees were resettled in Syracuse by InterFaith Works. One year later, the organization saw a more than 90 percent reduction with only eight refugees.

This has very real effects for those who benefit from InterFaith Works’ services, Broadway said.

“Our organization works to reunify families,” she said. “We work to bring spouses and children here once (the arriving refugee) gets established, but due to the executive order we can’t bring them.”

“Families are waiting — they’re scared,” she continued. “They can’t return to their own countries to visit. Families are still in danger, and this will continue.”

Due to the small number of people arriving, InterFaith Works has had to adapt to these circumstances, Broadway said. The organization has shifted its focus from preparing for the arrival of refugees to increasing its efforts with those who are here now.

Much of what they do now, Broadway said, focuses on navigating U.S. medical systems and helping refugees become citizens. The agency is able to supplement funding received through grants with donations from the community.

Brian Kam, co-founder of Thrive at SU, said the current political climate inspired the group to help refugees, which is why they teamed up with InterFaith Works last year. The first Thrive Together Fair raised more than $1,500 and was attended by many students and community members, including the mayor of Syracuse.

Khalid Khan, Thrive’s vice president, said this year’s fundraiser will feature “student organizations tabling at (the) event, representing the different backgrounds and cultures of our campus.”

Broadway expressed gratitude to the community for its generous donations, fundraisers and volunteer work. She also said that despite the current circumstances, InterFaith Works is as dedicated to its mission as ever.

“We are here, and we are not going away … we are committed to this work.”