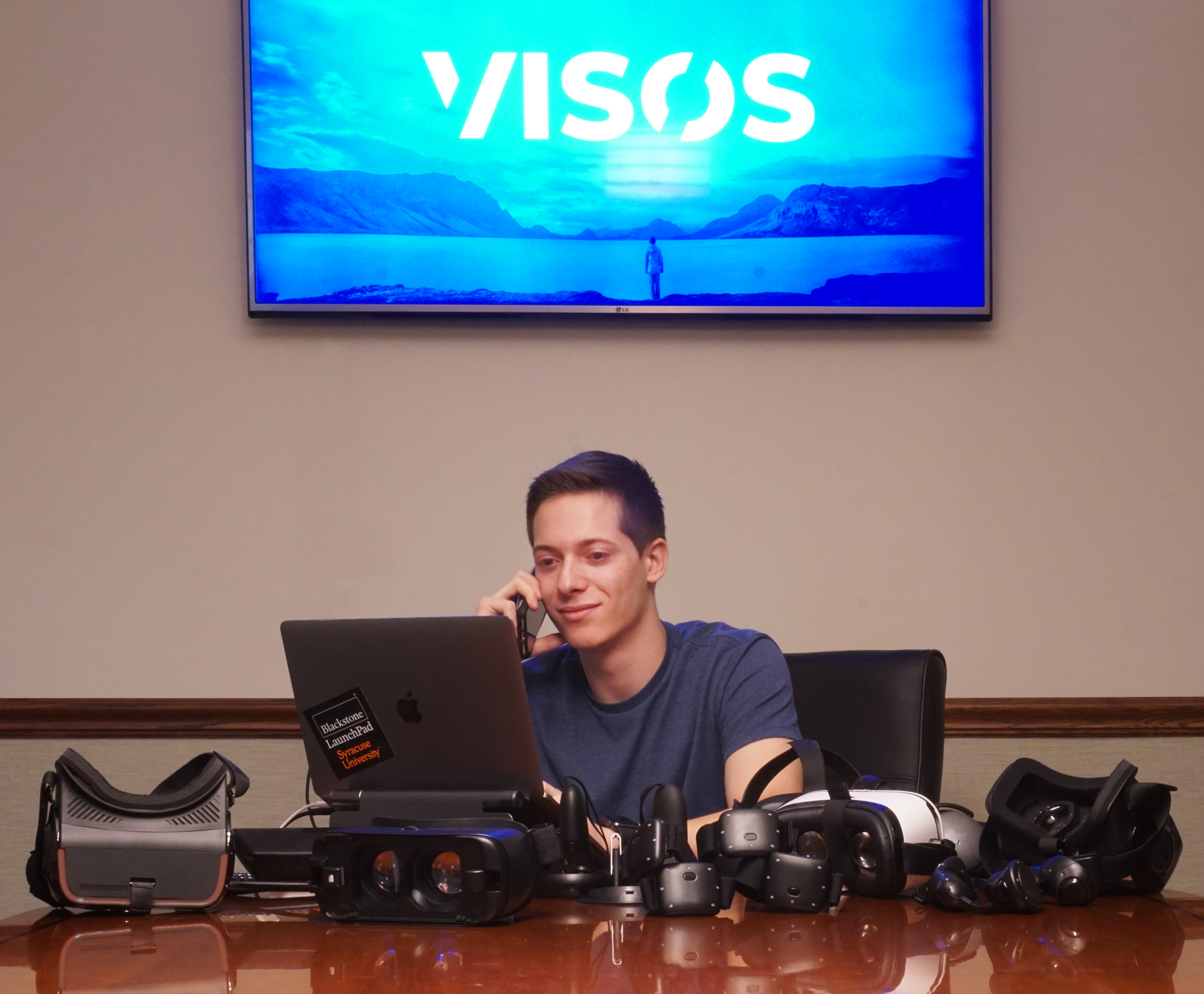 Matt Shumer ’22 (Martin J. Whitman School of Management), founder of Visos, was selected by the Blackstone LaunchPad powered by Techstars network to showcase his innovative enterprise VR system at the upcoming Consumer Electronics Show (CES) in Las Vegas, January 7 – 8, 2020.  He is one of a small group of startups selected for a Student Startup Showdown as part of  Techstars Startup Stage.  The Techstars event at CES 2020 will feature two days of exclusive programming including in-depth panels, as well as  pitch competitions that invite the next generation of startups to battle it out on the future of robotics and hardware, sports and entertainment, and a showdown of startups led by students.

Syracuse University LaunchPad and Techstars alumnus Josh Aviv ’15 G’17, founder of SparkCharge, will also be speaking at Techstars Startup Stage. Aviv’s university leadership panel will focus on how universities can work with startups to become more entrepreneurial, and how to engage and activate students in innovation.  The panel will include Courtney Gras, LaunchPad Director, Techstars, Erica Lock, Vice President, Blackstone Charitable Foundation, Josh Aviv, Founder and CEO, SparkCharge, and Jason Thompson, VP of Inclusion and Diversity, Techstars.  Aviv launched his ultra-fast, portable electric vehicle charging unit at last year’s CES event, and is now ramping up production at new manufacturing space in Buffalo, and new engineering and HQ offices in the Boston area.  He was this year’s Syracuse University Generation Orange award winner, and will be sharing some best practices from SU’s Blackstone LaunchPad powered by Techstars, as well as sharing insight about ecosystem support and resources that student innovators need to succeed.

Shumer will have two other turns on the national stage this spring.  He was selected to compete in the 2020 ASU Innovation Open on January 31 in Tempe, Arizona, a $200,000 competition designed to challenge and advance university student innovators who are launching a hardware enterprise within a wide variety of cutting-edge marketplaces such as IoT.  He will also be representing Syracuse University at the TCU Richards Barrentine Values and Ventures Competition on April 24-25, 2020 in Fort Worth Texas.  The competition, sponsored by the TCU Neeley Institute for Entrepreneurship,  features more than $200,000 in prize funding to top student entrepreneurs from around the country.  The Whitman School of Management is providing funding to send him to both the ASU and TCU national competitions.

Shumer is a Rubin Family Innovation Mentor at the Syracuse University Blackstone LaunchPad powered by Techstars.