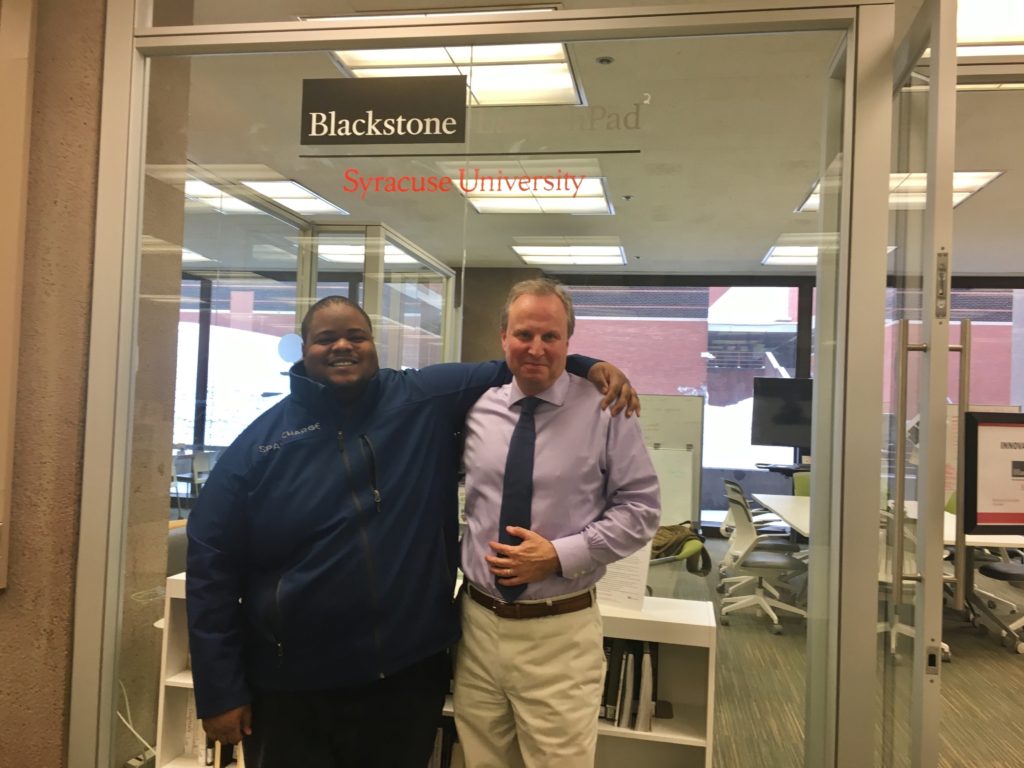 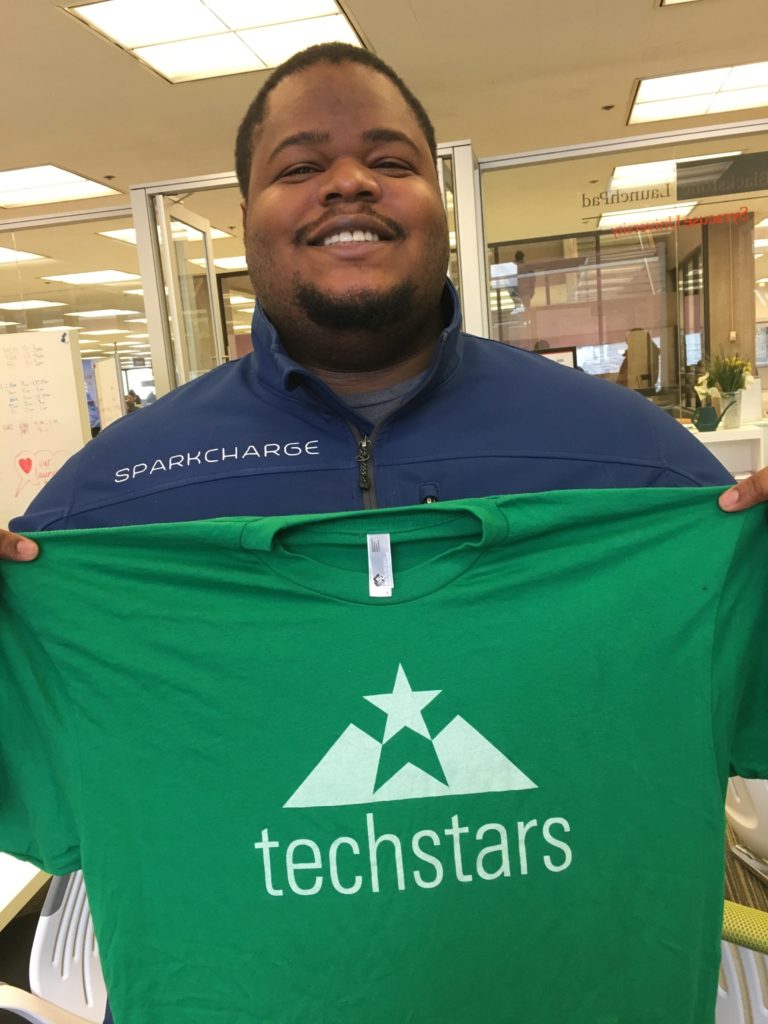 Syracuse University venture SparkCharge is the first to officially “launch” from a campus Blackstone LaunchPad program to a Techstars accelerator.  SparkCharge will scale its business with the support of Techstars Boston and investment by Boston-based venture fund, PJC.

SparkCharge has officially “launched” from the Blackstone LaunchPad at Syracuse University to acceleration stage with Techstars in Boston.  The startup has achieved a significant milestone, growing from a college student’s idea, to an award-winning company that has won several awards and raised institutional funding, and is now part of an accelerator program internationally known for rapidly scaling great companies. The latest investment round closed in February and the clean tech hardware startup expects to raise another round later this year.

Joshua Aviv, founder and CEO of SparkCharge, developed a portable, ultrafast charging unit for electric vehicles that fits in the trunk of a car and charges at level 3 speed, giving users one mile every 60 seconds.

Winning a spot in the Techstars Boston startup accelerator gives a competitive boost for the growing company. In the last 10 years, more than 1,000 Techstars portfolio companies have collectively raised over $4.4 billion in total funding, and are now valued at $11.4 billion.  Fewer than 1% of all companies that apply to a Techstars program are accepted into the worldwide network that inspires, educates and connects entrepreneurs, accelerating innovation and startup activity.

Aviv, a graduate of Syracuse University, conceived his idea as an undergraduate student, working with the campus-wide innovation and entrepreneurship ecosystem.

His connection to Techstars was catalyzed by his participation in the Blackstone LaunchPad/Techstars global venture pitch competition where he won grand prize last fall. The competition came at the conclusion of a two-day Blackstone LaunchPad/Techstars Training Camp, an innovative new program for collegiate entrepreneurs by the Blackstone Charitable Foundation. The program leverages the resources and intellectual capital of Blackstone, empowering entrepreneurs, generating job growth, and supporting local communities.

Josh at the Techstars Boston Accelerator

“SparkCharge is joining a vibrant group of entrepreneurs,” said Clement Cazalot, managing director for the Techstars Boston Accelerator. “Our Boston program has helped launch and fund 144 startups, with north of $750 million in total funding. Josh is now part of the most connected and successful entrepreneurial network in the world, as well as Boston’s very active angel network and VC industry that is focusing more on earlier stage tech innovation, enabling access to funds at all stages of development.”

“Each year we select the most promising companies to join our three-month mentorship-driven accelerator,” said David Cohen, founder and CEO of Techstars. “SparkCharge will now be part of the Techstars community for life, with access to over 1,500,000 founders, investors, mentors, and industry leaders. Leveraging the combined power of Blackstone LaunchPad and Techstars resources and connections, SparkCharge and other high-growth startups are surrounded and supported by a team of experts who can help them quickly start and scale.”

“We’re in Techstars to learn, grow, and network,” Aviv says. “We’re excited to bring this product to market, and working with this network will help us get to commercialize our technology faster and better.”

Through Techstars, Aviv and his team of four engineers are getting hands-on help and mentorship from experts in multiple fields, while working out of spaces such as Mass Robotics. A first-time CEO, Aviv says access to an international pool of knowledgeable and experienced mentors is already advancing SparkCharge to a new level.  “We want to keep a presence in Boston. We’ve fallen in love with the city,” Aviv says. “The startup ecosystem here is awesome.”

Spark Charge team at the SyracuseCoE

However, Aviv says the startup is not leaving its home in Syracuse. Personal connections and the manufacturing industry in Syracuse has strong pulls on the startup. “Our roots are in Syracuse and we want to tap into the manufacturing and industrial base there,” Aviv says. He expects to keep his research, engineering, testing and manufacturing based in the region, while focusing sales and finance operations in the Boston area where there is cluster of supportive investors. He particularly values his research collaboration with the SyracuseCoE, which is home base for his engineering team, research fellows and interns. His goal is to create regional impact. “To me, entrepreneurship means having a great social impact on every layer of our society. As entrepreneurs, we have the ability to create change in our communities faster and on a deeper level than many other people.”

In the meantime, SparkCharge is signing up electric vehicle owners to participate in testing their beta product. Answering questions and collecting feedback from users with various electric car models, the engineers are refining the product leading up to a manufacturing run later this year.

Supporting this growth is an investment by PJC, a Boston-based venture capital firm that focuses on consumer and enterprise technology investments. PJC takes an active approach to investing, striving to build collaborative relationships with portfolio company management. They have constructed the firm and their team around the strategy of building market-leading companies with innovative founders and serial entrepreneurs. The firm and its partners have backed market-leading companies across multiple industries such as Nest Labs, Yandex, Expensify and GetWellNetwork.

“We are excited to partner with Josh and the entire SparkCharge team,” said Mike Cunningham, a Principal at PJC. “They have the drive, conviction and vision necessary to solve the problems faced in this rapidly expanding market. We look forward to working with the SparkCharge team and Techstars to help bring their idea to the electric vehicle community.”

“Josh and SparkCharge is a perfect example of the transformational impact that Blackstone envisions Techstars will have on our LaunchPad program,” said Alisha Slye, global director of Blackstone LaunchPad.  “Their content, mentorship and network will provide expanded access for more LaunchPad ventures to grow and scale. Blackstone applauds Syracuse University’s leadership and commitment to entrepreneurship in our growing global LaunchPad network which we will now be able to scale to over one million student with Techstars support.”

Blackstone Charitable Foundation and Techstars announced this week at SXSW EDU that they are teaming up to supercharge Blackstone LaunchPad, the preeminent campus-based entrepreneurship program.  Read details here.