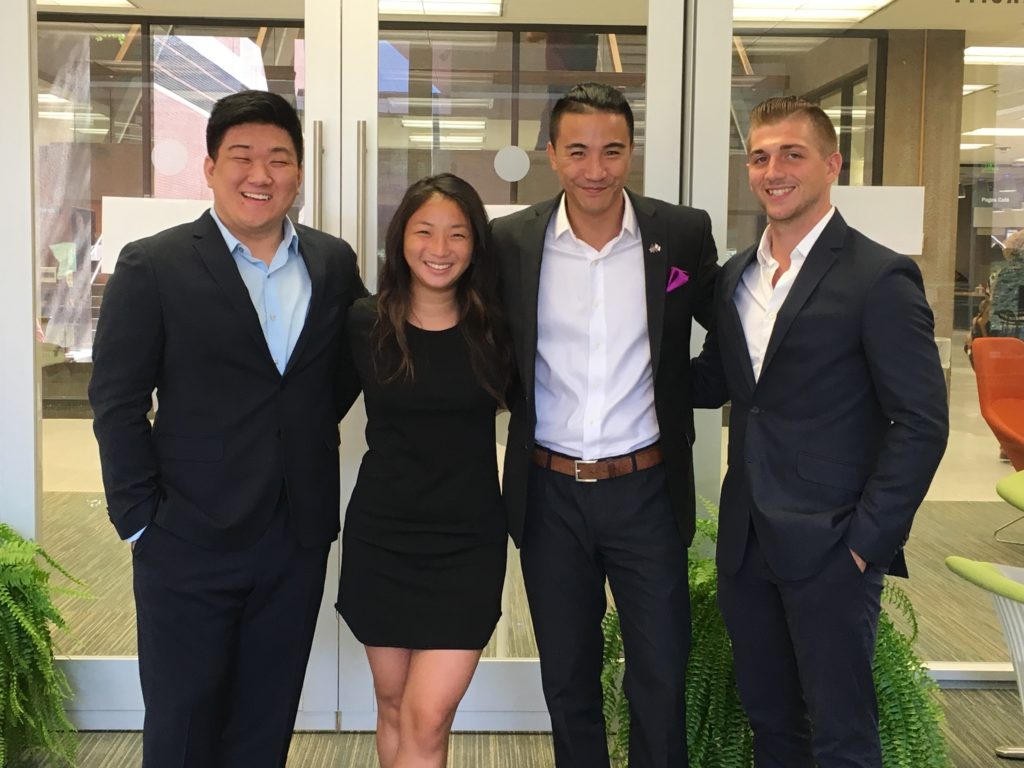 Sixteen SU student ventures divided $60,000 in cash prizes as part of the CompeteCNY regional qualifier for the New York State Business Plan Competition. Of those, six will go on to Albany April 29 for a statewide competition. But one company is going even further. Thrive Projects —the winner of the social entrepreneurship category and the overall top cash prize winner—is leaving May 23 for the Katmandu region of Nepal, where its members will be working this summer to deploy their technology. Thrive Projects is headed up by Brian Kam ’16, Ryan Brinkerhoff ’17 and Joshua Moon ’16.

Thrive Projects is a Type B not-for-profit corporation formed for charitable and educational purposes. The company is developing the S.P.A.R.K. system—short for Solar-Powered Auxiliary Relief Kiosk. The innovative device uses a 50-watt solar panel to charge a 12-volt battery that can be used to power devices utilizing rechargeable batteries. The unit can provide power via a standard outlet, USB port or car plug with a power invertor.

The team is bringing four assembled units and components to build four additional units once in Nepal. Working with local communities, the group will educate local residents on how to use the system. More importantly, they will teach local residents how to build the units themselves, using easy-to-procure, affordable parts. In that way, local communities will understand how S.P.A.R.K. can help provide immediate renewable energy solutions in emergency situations, and also as a strategy for self-sufficiency as an off-the-grid solution to healthcare, communication and infrastructure challenges that result from disaster or humanitarian crises.

Kam is the founder and director of Thrive Projects Inc. A native of Rochester and former U.S. Infantry Marine (2003-2007), he is majoring in international relations and Middle Eastern studies in the College of Arts and Sciences and the Maxwell School of Citizenship and Public Affairs. As a Maxwell student, Kam connected with Aythos, a NGO co-founded by Maxwell School alumnus Beau Miller G’10, which has worked in Nepal for six years. He has worked in Nepal and in other areas around the globe as part of relief teams, and plans to continue his education at nursing school, developing additional skills to deliver critical medical care, public health and other relief services.

Thrive Projects co-founder Brinkerhoff is pursuing degrees in policy studies and economics, and has worked on the communications teams at the White House Office of Management and Budget and the Office of the United States Trade Representative. Moon, another company co-founder, is majoring in biology, with plans to attend medical school. He will be working at Mt. Sinai Hospital doing clinical work as well as lab research when he returns from Nepal.

“I’m doing this to give voice to the voiceless,” says Brinkerhoff, “and to show those who feel alone that they have not been forgotten.”

“Thrive to me is about reaching out and caring for those who live in communities that have been forgotten and left behind,” adds Moon.

“While I cannot leverage against all the critical issues Nepali villages will face in the future, I have the utmost confidence my first-hand experience installing solar-powered charging kiosks will be of significant and critical importance to alleviate the ongoing and future challenges that will take place in Nepal as result of ensuing earthquakes,” notes Kam. “Since my departure from Nepal in August 2015, I have longed to return to Nepal to continue the humanitarian work that I found so critical and rewarding to those who continue to be effected.”

Working with Aythos, Kam did a self-funded Nepali earthquake disaster relief tour as a volunteer relief coordinator. He worked to help meet immediate post-disaster needs such as emergency shelter, medical and food distribution, as well as early-recovery phases that included clean water and energy solutions. From that unique vantage, he developed the concept of rechargeable solar-powered charging kiosks to facilitate emergency communications, lighting and use of small electronics and power tools. He realized that rural communities affected by natural disasters could be cut off from relief access up for up to one or two weeks at a time.

When he returned from Nepal, he set up a GoFundMe page to fund the development of S.P.A.R.K. units to bring to villages in Nepal this summer and beyond. So far, the team has raised $4,226, and they estimate that the $10,000 in CompeteCNY prize winnings will help them build 28 more systems.

Thrive Projects has been working with the Blackstone LaunchPad at Syracuse University to refine its deployment plan, as well as its pitch at the upcoming statewide competition.

Twenty-nine Syracuse University teams competed in the CompeteCNY regional qualifier for the New York State business plan competition, hosted by the Blackstone LaunchPad, located in Bird Library. The top 16 were selected by independent judges to receive $60,000 in prize money provided through the Provost’s Office to help advance their ideas. The awards were presented at the grand opening of the LaunchPad on April 19.

The winning campus teams are:

The six teams moving to the New York State finals are Thrive, Beauty Beat, Power Spike, Out There, Design to Table and SOYL.