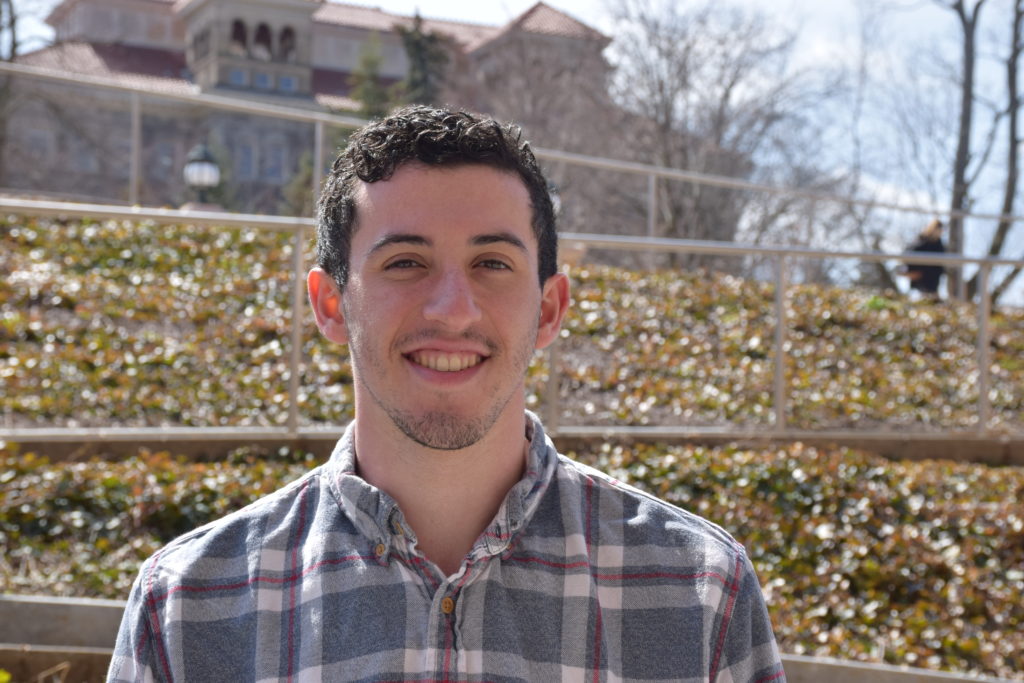 Scott Pecoriello may only be 21 years old, but don’t be fooled by his age.  He is a confident entrepreneur. Scott grew up in Westport, Connecticut and made his way to Syracuse University where he is now a sophomore. He officially launched his company, Wild about Weather, his sophomore year of high school, then changed the company name to Weatheroptics as it grew to more than 200 active clients and 25,000 active followers, and was featured on featured on News12, The Connecticut Post, CT’s 95.9 The Fox, and CNBC.

The company provides valuable data and weather insight to both businesses and consumers.

Scott describes himself as energetic, passionate, and hardworking. He carries himself with a sense of confidence necessary to manage a business even at such a young age. He admires entrepreneurs such as Evan Spiegal who had a cool idea that gained traction. Joel Myers, founder of accuweather, is someone else Scott admires for how he bootstrapped and scaled his company. Joel worked in the weather business for years before turning it into one of the biggest weather companies in the world.

But Scott’s biggest role model is his dad, a fellow entrepreneur who runs his own data company in New York City. Scott often goes to his father for inspiration, advice and problem solving, as he builds his own business.

What makes Scott an entrepreneur are his capabilities as a leader — his strong vision, and his ability to bring together good groups of people who have good synergy with one another. He says, “It takes a lot of passion and grit.  You,can’t do without those.”  The road to where he is today was not smooth, and had quite a few unforeseen bumps along the way. This is Scott’s story.

Scott started a weather blog in the 7th grade. Weather was always something he was passionate about and so he wanted to do something with his passion. The blog wasn’t initially as popular as Scott would have hoped. Throughout middle school the blog only had 12 followers. By the end of middle school he decided to expand into social media. He started using Facebook to gain more traffic. By the beginning of high school, he had thousands of people checking out the blog and Facebook page regularly. Freshman year of high school, he gained enough traction that he felt it was time to try and make money from it. He created a website that offered weather related consulting. Approximately 200 people signed up within the first year. Throughout high schoo, Scott continued to gain more followers, but found that the consulting business was no longer sustainable, and discontinued the service.

By the end of high school, the website and blog were getting tens of thousands of views regularly, but he couldn’tt figure out a way to make money. When he went to college, he interned for a data company, and his boss had a weather company of his own. After a few months, Scott’s boss agreed to partner with his weather company. Scott thought this was the turning point for his company and that things would grow from there.  “The company seemed to really be taking off.”

They partnered with another major weather company and started getting regular income. They hired four  people and the company seemed to be getting traction. These partners were in their 50’s and 60’s, much older than Scott. About 6 months into the new partnership, Scott said, “I realized that our vision wasn’t the same.” It was time to part ways, and he told the team they were disbanding, and built a new team. Since then, Scott has changed the entire vision of the company which currently has 15 part time employees. Now, they are growing faster than ever before.

Starting his weather company was the biggest entreneurial venture Scott has done. It took him years to make Weatheroptics into the company it is today.  He explained some of the lessons he learned along the way. “Don’t get too excited about people having interest in what you are doing. Due diligence is very important — doing background research, really knowing the person you’re partnering with is critical to success. I was so excited to be working with older and experienced people that I was blinded to what they were actually doing.”

After overcoming an attempted coup against him by his original partners, he grew as both a person and an entrepreneur. There have been other challenges along the way, in order to learn and grow. The original partners wanted to build an app, but when the app was launched, it didn’t serve the purpose it was meant to.  That initial misstep cost time and money, and now his team is completing a new app utiitzing artificial intelligence to run their weather algorithms, which provides an even better value proposition.

Scott built his new team through his personal network of intelligent and talented individuals. Scott chose people he knew before starting the business who he thought would help him realize his vision.

Scott is now also working on Flock, a mobile application that allows people to join a group and find bar crawls with discounted drink deals. A bar is selected each weekend for users to “flock to” with friends. Upon checkin the user can then get discounts and a winner is selected at the end of each crawl with the chance to win additional prizes. In this process Flock increases the number of people that go to bars on the app and collects data from the users that is then available for bars to see.

The way Scott sees it, entrepreneurs are both born and made. He believes there are certain traits that entrepreneurs are born with, but also crucial ones that everyone who strives to be an entrepreneur needs to learn.  “It is all about the long run, if you are in it for the short term gain you’re in the wrong field.”

Scott would not want to work for anyone else ever again. He has always wanted to do things by his own rules and feels he would not make a good employee because he simply is not a follower. Scott is a charismatic leader who rallies those around him to his cause, and it shows. He is personable, but but knows what he wants, and has the drive to make it happen.

“Grit is the number one most important thing. It is all about the long run, if you are in it for a short term gain you’re in the wrong field.” The word grit came up several times throughout the conversation, and as he explained, it is something he says any aspiring entrepreneur needs in order to be successful.

As Scott’s story proves, it takes determination to maintain resolve. People have questioned him because of his age, because he is still in school, and because he is in a field that typically consists of older and experienced individuals.

Scott recently won the Hunter Brooks Watson Spirit of Entrepreneurship Award at the recent iPrize competition, which will help him continue moving towards his vision.  He is a new kind of weatherman who is staying fixed on the long term horizon.