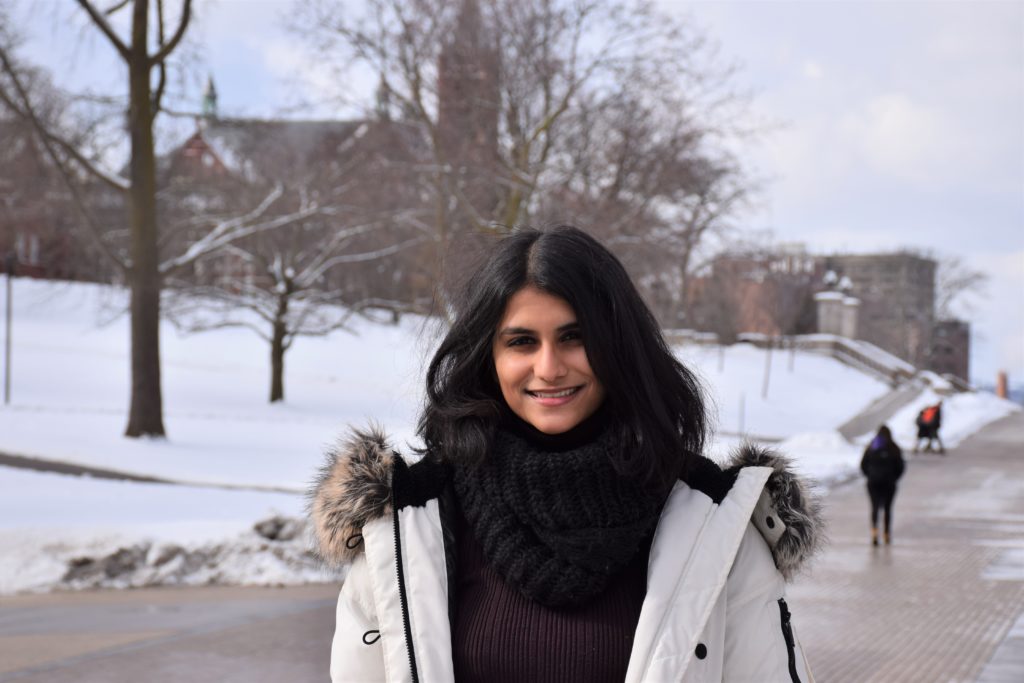 Saniya More ’19 believes in the beautiful and complicated intricacies of the human experience. She is also an entrepreneur who has created a unique way to capture and share those experiences.

With deep family roots in Thailand and India, and new student at SU, she looked for a way to make meaningful connections with her classmates. She quickly found friends in a tightknit circle of international freshmen, but found she was struggling to find a voice that resembled theirs, particularly in student media platforms. Saniya saw the need for an outlet that would allow students like her, from the 50 countries that comprise Syracuse University, to express their diverse cultural identity and perspectives. From that, grew the seed of an idea for an entrepreneurial venture to bring together other students like her, from across campus and around the globe, in a collective digital media platform with inspiring and thought-provoking original content.

In the fall of 2017, Saniya teamed up with Hanna Benavides ‘19, a native of Mexico, to launch their venture called Globalists. They assembled a team comprised of students who are talented writers, photographers and filmmakers interested in telling student stories that celebrate diversity. “Many of these interesting cultural identities just can’t be summed up in one sentence,” Saniya says. “We have layers to us. Globalists encourages people to peel back the layers, even if it is uncomfortable or hard to share. We really need to give voice to these stories, especially those that are not always talked about on this campus.”

“A Globalist is any individual with a cultural identity, who likes starting conversations on global issues,” reads the team’s mission statement. “Globalists value diversity and makes it their mission to share underrepresented perspectives with the people around them. Globalists gives great importance to freedom of expression, and makes it their mission to be a voice for those who are too quiet or too loud. Above all, a Globalist is a citizen of the world.”

Saniya sees the venture as a way to break past so many Americentric discussions she notices within and outside of the classroom. It is a way to give voice to a breadth of opinions – especially important since 25 percent of the Syracuse University campus population belongs to minority groups and 20 percent of the population is international. Beyond sharing narratives by international students, Globalists now also focuses on events that celebrate diversity, such as the recent Martin Luther King Jr. Dinner at the Dome.

It is not surprising that Globalists are entrepreneurial creatives.  Saniya herself is an entrepreneur. She created the Aboli Foundation in India with her sister in 2016. It is a nonprofit that works with children of the Adivasi community of indigenous peoples that can be found across South Asia. According to Minority Rights Group International, the Adivasis comprise more than 200 distinct peoples speaking more than 100 languages, and vary greatly in ethnicity and culture. What is common, however, is similarities in their way of life and oppressed position within Indian society. As marginalized populations, their isolation can be detrimental for the full, healthy development of children.

Aboli Foundation works with primary school children, teaching them English and basic social skills, while preserving their unique indigenous cultural identity, values and traditions. With a group of volunteers, Aboli Foundation is working towards removing the societal stigma that has been historically associated with the Adivasi community. Saniya has seen first-hand that connecting with these children – as a teacher and filmmaker — is a beautiful and powerful experience.  She sees shared human experiences as the most meaningful way to close separations between societies and cultures. As her honors capstone project, she is creating a documentary on the Adivasi community and how it has changed over time, with a particular focus on how each generational evolution has resulted in cultural loss.

As a junior studying broadcast and digital journalism, as well as minoring in Spanish and South Asian studies, she hopes to work as a foreign correspondent, and become involved with the documentary film production industry.  Both will demand her entrepreneurial skills and mindset.  She hopes to eventually return to India to gain a deeper appreciation of her heritage.  And to continue telling stories from her unique perspective as a true Globalist.