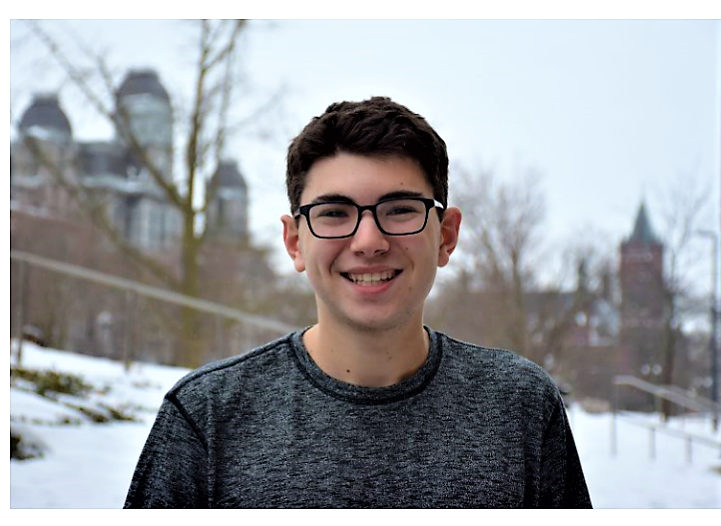 Sam Hollander, a freshman at the S.I. Newhouse School studying advertising came to Syracuse University with a passion for entrepreneurship that he had developed over four years.  When Hollander was in high school, he first found his passion for multimedia storytelling, and figured out how to monetize his passion. He started his own content creation business, creating photo/video content solutions for life events, companies, and corporate marketing campaigns. His goal was to help people capture moments, tell stories, and build his foundation for entrepreneurship.

Although Hollander had to step aside from his content creation venture to come to school, he still had the itch for entrepreneurship. He wanted to “continue his innovation education” while pursuing a college degree at one of the top communication programs in the country.  For that reason, as an incoming freshman, he elected to live in the Creativity Innovation and Entrepreneurship learning community, where he met Matt Shumer,a Whitman freshman and fellow entrepreneur. Shumer saw Hollander’s talent for content creation and marketing, and his interest in finance and banking, and wanted to start to work with him.

Together, they started to grow OptechVR, a business Shumer started a few months prior. Hollander initially started in a marketing role and is evolving into operations, where he is “really excited by the company, and its goals and aspirations.”

OptechVR is creating the world’s easiest to use VR headset, merging cutting-edge technologies to make an affordable, accessable, usable, and high quality VR headset to the market. Hollander thinks that being able to make VR an every-day, household item, like an Xbox, is going to be a huge leap forward in the technology industry, and he is excited to be a part of the team making that happen. In his operations role, Hollander is tasked with conducting the overarching logistics behind the business, and day-to-day operations. He notes that, “being able to be a part of a startup, learn new things, and being able to merge new skills with prior knowledge is the best part.” His position forces him to learn about business finance, leadership, and external business relations/strategic partnerships.

Hollander competed as part of the OptechVR ream in the Cuse Tank prize, and Impact Prize at Syracuse University. This was his first time doing a formal business pitch and he said it really helped him learn the art of pitching. OptechVR was slected one of the top 32 student startups in the world according to Student Startup Madness. OptechVR is currently waiting to hear if they were ranked in the top 8, which would give them the chance to compete, and network at SxSW in Austin, Texas.

Tasked with a new mission everyday, Hollander is constantly learning how to be a better entrepreneur, and improve himself. Follow him on Instagram, and take a look at his portfolio.