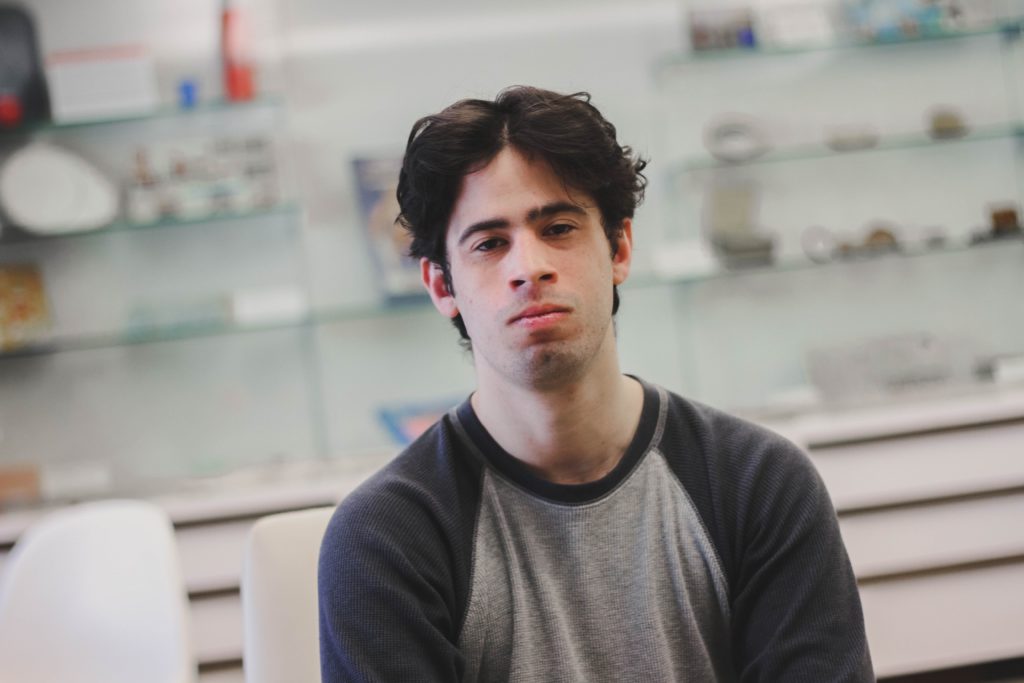 Phil McKnight, a junior studying Information Management at the School of Information Studies, is working on a big idea:  Promptous, a student startup building a blockchain insurance claims processing platform, which aspires to disrupt the insurance industry. Phil is VP of Business Strategy for Promptous, and a blockchain expert who can explain the technology in simple, easy to understand terms.  “Rather than having a central authority like a bank managing information sent across a network, everyone is sharing the same data in a way that generates a ripple effect if someone makes a change. Everyone then gets notified of that change which leads to communal fact-checking. Storing and distributing information in this way greatly simplifies business processes, and has a lot of disruptive potential – especially in the insurance industry.”

Phil, along with grad student Josh Jackson who founded Promptous, realized this is especially applicable when it comes to the dental industry. Phil agrees that the current dental industry is quite inefficient, where it can take up to six weeks for practitioners to get paid — assuming an insurance company even approves a patient’s procedure. Insurance companies currently hold most of the power in determining when and how and how much practitioners are paid, and that can largely depend on a practitioner’s location. Promptous offers an alternative by making the whole process more transparent, giving both the practitioner and the patient have a clearer understanding about payment for services, leaving less leeway for unfair practices. Phil is helping facilitate Promptous’ entrance into the market by connecting the company with partners and clients – a critical responsibility in determining the success of the venture.

Phil comes from a family of entrepreneurs, and it is hardwired in his DNA.  Promptous is only one of several ventures he has been involved with. Last fall, Phil was confronted with a difficult choice which to make that most students aren’t confronted with. “I had to make a decision between going to Costa Rica to see a major potential partnership come together, and possibly even meet the country’s President, or stay in Syracuse to take my finals,” he recalls. He had connected Imcon International — a company he worked with that developed the Internet Backpack — with Dr. Alvaro Salas-Castro, the CEO of the Democracy Lab, which seeks to better equip Latin Americans with the knowledge they need to participate in their own governance. The partnership meeting was scheduled to occur just as finals week was kicking off.  While he was unable to go, he was proud when Imcon entered into a partnership with the Democracy Lab to “work with the Government of Costa Rica and non-governmental organizations to bring internet connectivity to indigenous and other underserved, remote populations of the country.” Phil cites fostering this partnership as one of his biggest achievements, and uses it as an example of how much can be accomplished through simple connections.

Phil elaborates on the importance of connections.  “They’re absolutely critical, and the good thing about them is that if you don’t have them, you can get them.” When asked if he has advice for people who want to make more connections,” he says, “The LaunchPad provides a lot of connections, but like anywhere, it starts with an entrepreneur asking important questions such ‘who do I need to talk to, what do I need to know, and where can I find people who can help me with the important first discovery?’” He adds the professional conferences are also great for connecting, and recommends talking to people through ”warm channels” where there is a mutual connection prior to meeting someone new.  He recommends LinkedIn as a strategic way to meet people outside of a small circle of immediate connections. “Building relationships with new connections is just as important as making the connection.”  He suggests, “Try to find areas of common interests or find out what people are passionate about, what they do, why they do it, and what they’re trying to do with it. If you can help people connect, do it. It leaves an impression.”

Phil looks forward to helping grow Promptous to the next stage.  “There’s a lot of potential here, with the possibility of evolving the American insurance industry. I hope it’s disruptive.” He also mentions that he’d like to potentially work in consulting at some point and get involved with the advancement of democracy, helping it become more inclusive and representative of the people governed by it.

Phil has a gift of seeing a vision and helping it actualize.  That’s the hallmark of a disruptive innovator.