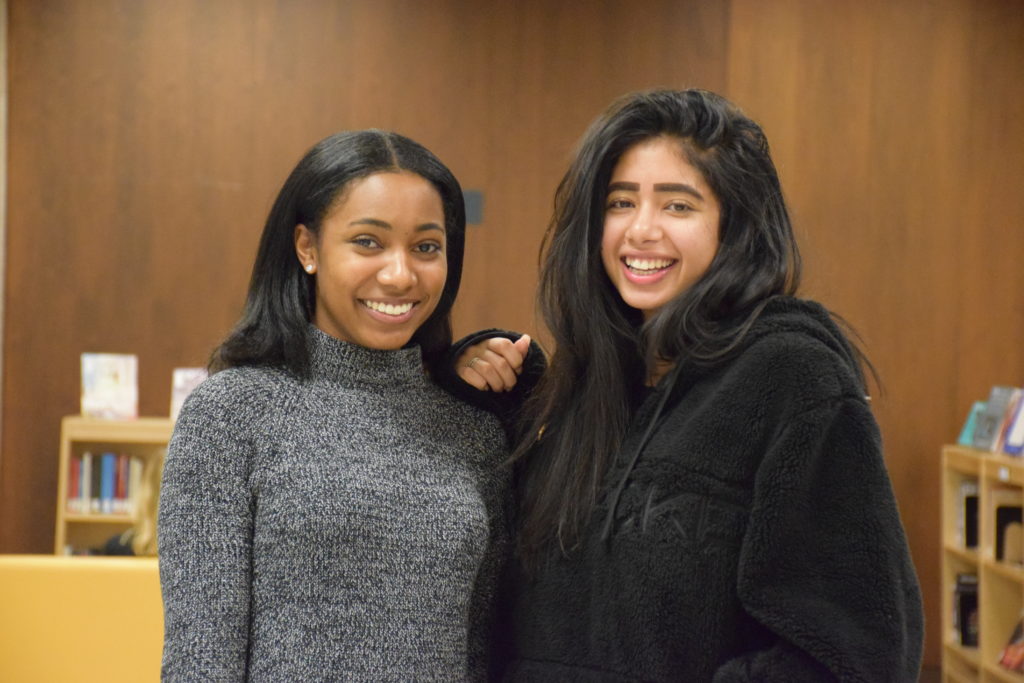 Brianna Howard and Nikita Chatterjee, co-founders of PAANI, are working to bring clean water to a slum neighborhood in the heart of Mumbi, India.  Their concept is for a water filter made from resources that are readily available in Dharavi, the largest slum complex in all of Asia, as well as an educational program to improve public health and the quality of life through community engagement.  The are working on the idea with a team of local mentors, including Dr. Neil Murphy, retired president of SUNY ESF, and coaching from the Blackstone LaunchPad.  The duo were recently selected for Women Entrepreneurs Make a Difference program by Capital One Bank, and will be pitching their idea in early January at the American Economics Association (AEA) Annual Meeting.

Chatterjee is a junior studying finance and economics, while also on the pre-medical track. She is originally from Palisades Park, New Jersey, and is the eldest daughter to two immigrants from Kolkata and Mumbai, India. As a first generation college student, she hopes to pursue a career in pediatric emergency services, and to one day own and run her own pediatric outpatient clinic.  “Having motivations so personal to me has allowed me to be passionate about what I study,” she says. “The issue of public health in India is so close to my heart because my family has roots there and have personally experienced the low availability of resources.”

Howard is a first generation college student from Queens, NY majoring in public health. Growing up in a single mom household, she has always known what it means to work hard. “It’s quite ironic that the field I wanna go into is the field of public health, knowing that I grew up in a district that received little to no funding for health promotion and prevention,”she says.

“My passion stems from the exact factors that were placed against me, so to me there are no limits to what I can accomplish and achieve,” notes Howard. “I chose the field of health because I have a passion for working with communities and understanding the ways in which health can be improved as a community instead of through individual impact. I love working with children because I truly believe that the impact that is made within them is an impact made for future generations to come. For this reason I work as a tutor in an elementary school located in the Syracuse City District, twice a week.”

Together, the team is working on a global impact project, in which they were given the opportunity to make a change in a community through Women Entrepreneurs Make a Difference in Communities, a program developed by Capital One Bank. The program is designed to given women entrepreneurs the opportunity to develop and refine their skills to help contribute to the economic and social strength of a community. The Future Edge initiative has given grants to students thrive in creating programs to help communities and their economies. Read more about the program at https://www.capitaloneinvestingforgood.com/future-edge.html.

“Public health is an issue very important to the both of us, as we both have had personal experiences that have led us to be so passionate about medicine and the public health system,” addes Chatterjee. “Because of this, we have decided to use this opportunity to combine both of our passions and focus on the water sanitation and access issues in a large, complex slum located in the heart of Mumbai, India.Our goal is to find a way to bridge the gap between access to water and improvement in quality of the water.”

The two are focused on a slum is called Dharavi, deemed the largest slum complex in all of Asia. The slum spans about 535 acres and it is estimated that about 869,565 people live in one square mile. The slum is complex, but is considered a good place for outside investment because of the amount of people who live there and the low cost of labor. “The slum is innovative and has been able to thrive off of its own sewage system,” according to Chattejee, “however, the government has limited their access to water. All over India, there is a limitation put on water due to factors such as location, lack of resources, and a high demand for a large population.”

Working with local mentors and water quality experts such as Dr. Murphy, Chatterjee and Howard are working on the concept of a tangible water filter. They are hopeful that their innovation will not only enhance water quality, but will give women (who often travel for hours to carry fresh water to their homes and communities) a chance to become more entrepreneurial by freeing up time to pursue other ventures, including small businesses.

“Nationwide, women entrepreneurs are providing valuable products and services, adding jobs, and contributing to the economic strength of their families and communities,” says Jessica Lawrence, executive director of New York Tech Meetup. The Center for an Urban Future’s study, “Breaking Through: Harnessing the Economic Potential of Women Entrepreneurs,” found that while women founders want to make money, they also want to positively impact the world. “In general, I see more women looking to figure out whether they can impact the world through the technology they build.”

Chatterjee will be pitching at the American Economics Association Annual Meeting in Atlanta, January 4-6, 2019.  Established in 1885, the AEA is a non-profit, non-partisan, scholarly association dedicated to the discussion and publication of economics research.  The annual meeting is attended by researchers, scholars, public policy experts, economists, industry leaders and social impact investors.