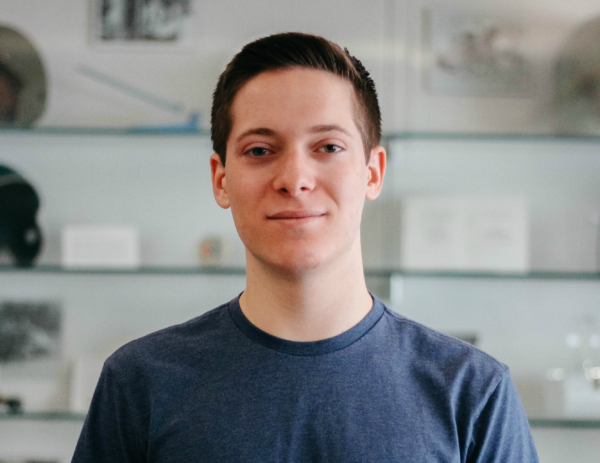 Syracuse University student startup OptechVR, co-founded by Whitman freshman Matt Shumer, has been selected as one of  32 college student startup teams from across the nation heading  to the semi-final round in the 2018-19 Student Startup Madness (SSM) tournament, where it will compete for top honors and the SSM National Championship. The semi-finalist teams (SSM 32) come from 27 different colleges and universities across the country and have digital products and services in more than a dozen different industries.

Student Startup Madness  is the only nationwide collegiate tournament focused on digital media startups. It affords college student startups the opportunity to compete against fellow student entrepreneurs, grab the attention of potential investors and supporters, and build an elite professional network. At the SSM finals at SXSW, the Entrepreneurial Eight will pitch their business to well-known investors and entrepreneurs who can help them take their early-stage ventures toward success.

The SSM 32 feature college student ventures which aim to disrupt education, transform influencer marketing, develop podcasts on-the-fly, and create rec-leagues for esports gamers and new VR/AR worlds. New online and mobile services include breakfast delivery that has taken logistics to the next level, AI-powered cleaning on-demand, ridesharing for parents, and all kinds of services for shopping and socializing. Many use their college ventures to create social impact, such as anonymous tracking of on-campus sexual harassment, AI assistance for the visually impaired, and creating crowdsourced accountability in factories in developing countries to combat human rights abuses.

About the SSM Tournament Format

Each round of the nationwide tournament builds momentum, awareness and social media buzz, drawing attention to colleges and universities as sources for innovation, entrepreneurship, and talent while showcasing university entrepreneurship and encouraging college students to start businesses.

Student startups from colleges across the nation applied online between August and early December. The first round of competition was held online among the 64 startup teams, with judging conducted via Gust.com, a platform used by angel investors around the world. Thirty-two semi-finalists were chosen to advance to the next round. By late January, the Entrepreneurial Eight finalists will be selected and invited to pitch to a well-known panel of entrepreneurs, venture capitalists, and investors at the Student Startup Madness national finals in Austin, Texas, on Monday, March 11, 2019. The SSM Finals and Championship event will be held at one of SXSW’s main venues in the downtown Austin Hilton hotel conference center.

SSM also cross-promotes the tournament with Women 2.0, the leading media brand for the next generation of technology leaders,  and Student Veterans of America, a coalition of student-veteran groups on more than 1,300 college campuses across the globe. SSM also partners with companies such as DraperU Ventures (with its Draper University entrepreneurship programs), who helps offset the costs of running the tournament. These organizations believe in the power of American entrepreneurship and innovation on our college campuses.

Student Startup Madness debuted in 2012 at SXSW Interactive with a launch event and kick-off pitchfest, where five student startup teams representing eight colleges and universities pitched their ventures and won prizes. Today it is a national tournament and a perennial part of SXSW. For more information on Student Startup Madness, visit the website (https://studentstartupmadness.com), see us on Facebook, or follow us on Twitter: @StartupMad.