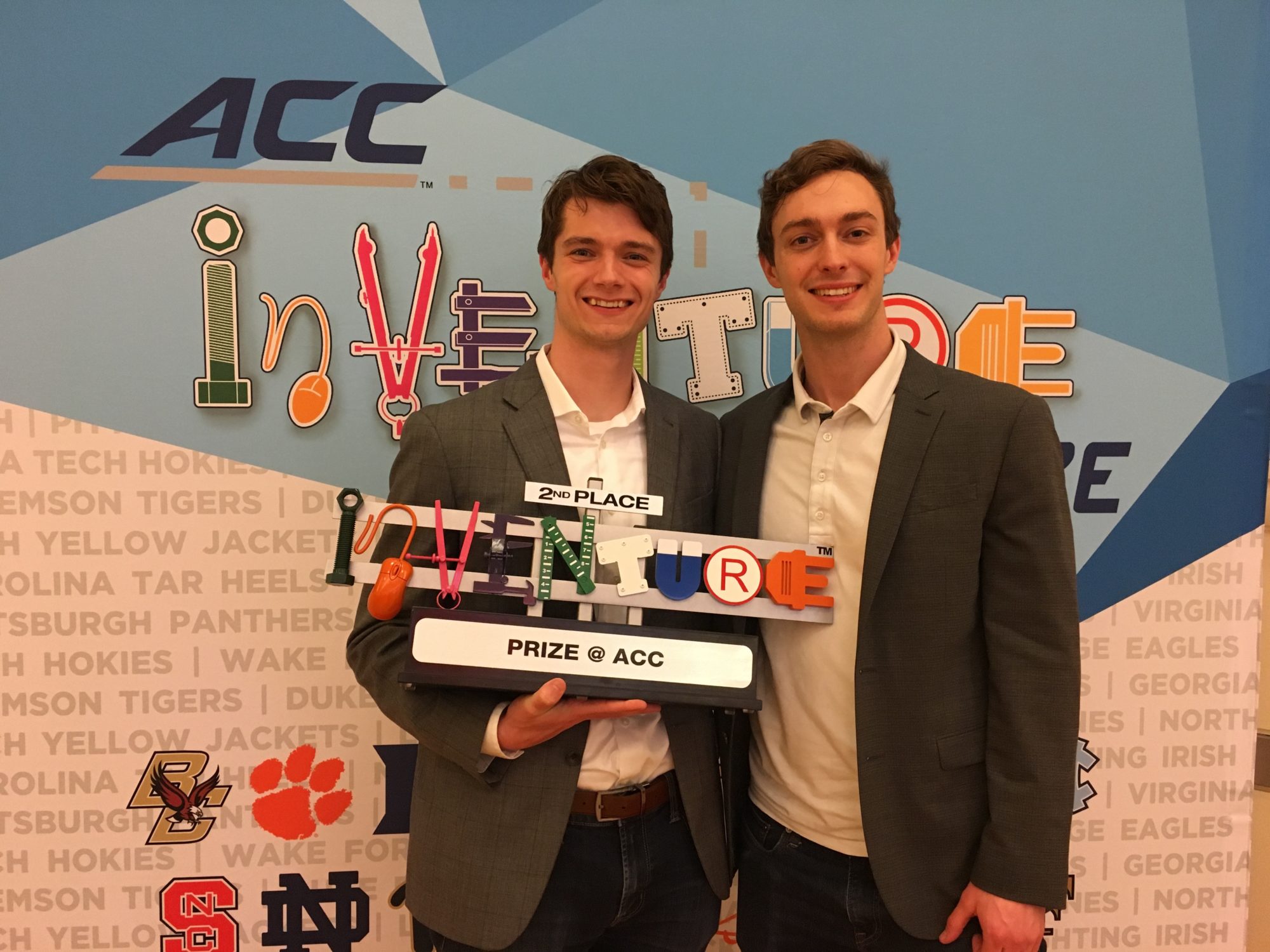 Syracuse University Libraries’ Blackstone LaunchPad participants Quinn King and Alec Gillinder won second place at the Atlantic Coast Conference’s (ACC) InVenture Prize Competition held April 16 – 18 at North Carolina State, Raleigh. King (VPA, ‘20) and Gillinder (VPA, ‘20) competed in a head-to-head, “Shark-Tank” style battle for “top inventor” in the ACC conference. As second place winners, they received a $10,000 prize. The final round of the competition was televised and broadcast by a number of Public Broadcasting stations across the Northeast region.

The two VPA School of Design students’ team, MedUX, created a wearable product that is a portable solution to traditional intravenous (IV) medical treatments. It allows patients to abandon the traditional IV pole for a more portable solution.  Their invention, L-IV, which they’ve dubbed a “liberating intravenous” product, uses both gravity-fed and pressure infusion methods to allow infusion patients to remain mobile and active while receiving treatment.

Developed at Invent@SU, a collaboration between the College of Engineering & Computer Science (ECS) and the College of Visual & Performing Arts (VPA), the product is being refined and commercialized with assistance from the Blackstone LaunchPad powered by Techstars at Syracuse University Libraries.  The team has filed two provisional patents and is now filing a non-provisional patent to fully protect their invention, while they work with a team of expert industry advisors and strategic partners to bring their product to market.

The ACC InVenture Prize Competition is a collaborative effort by institutional leadership from the ACC and represents an opportunity to stimulate undergraduate entrepreneurial activity and increase student-faculty engagement, celebrate and highlight the exceptional creativity and ingenuity of students, and inspire a greater sense of camaraderie across the conference. Teams representing each ACC university were given the opportunity to pitch their inventions or businesses before a live audience and panel of judges and competing for $30,000 in prizes and a chance to be the next winner. Fifteen university teams pitched during the preliminary round on April 16th, and five finalists were chosen to advance to the final round on April 17th. King and Gillinder were selected to participate in a final round against DeLive (Notre Dame), Ethos Medical (Georgia Tech), InnoHealth Diagnostics (FSU), and MIST (UVA).

About the Blackstone LaunchPad powered by Techstars at Syracuse University Libraries:

The Blackstone LaunchPad in Bird Library is Syracuse University’s innovation hub, connecting the entire University’s resource-rich ecosystem with a global network that provides support for aspiring entrepreneurs, inventors and creators. The program serves faculty, staff, students, and alumni across disciplines who are interested in venture creation and taking ideas for products, services or technologies from concept to commercialization. The program prepares participants to be trailblazers in an entrepreneurial world.