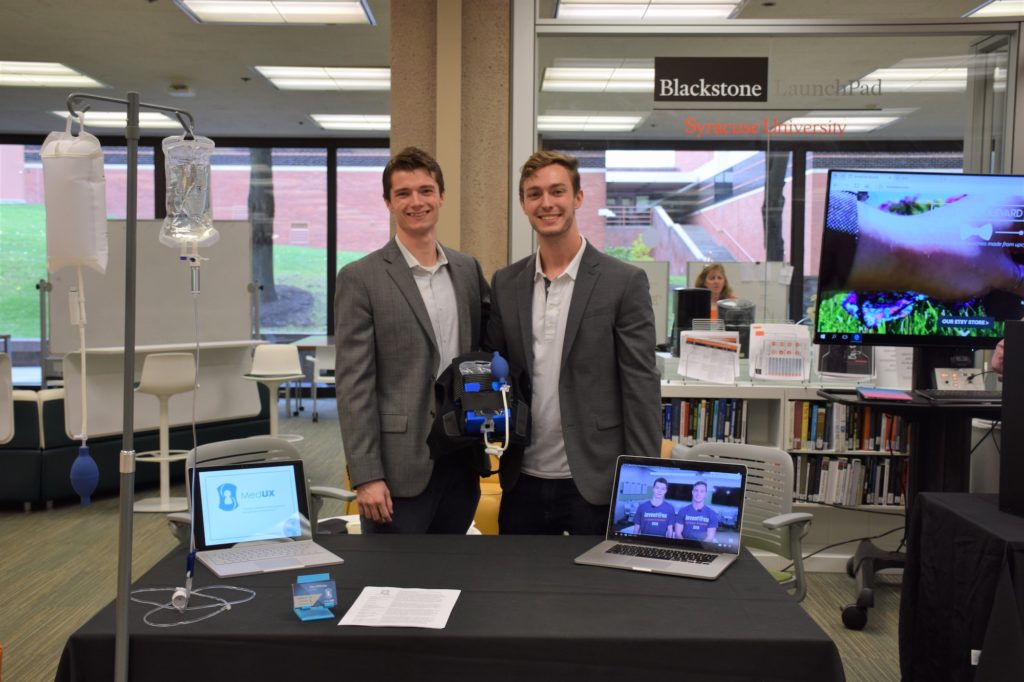 Syracuse University College of Visual and Performing Arts, School of Design students Quinn King (left) and Alec Gillinder ’20 (right) won the $10,000 second prize this week in the prestigious ACC InVenture Prize Competition, which was televised live on PBS across the east coast.  If you missed their award-winning performance, there is another chance to watch the show this Sunday, April 21 at 2 p.m. on local PBS station WCNY  which covers a 19 county Upstate region.  Find where to watch here.  The show aired live Wednesday evening as five finalist teams went head to head, “Shark-Tank” style, in a battle for “top inventor” in the ACC conference.

Gillinder and King’s team, MedUX, were selected from the field of ACC universities to be part of the final five and square off against DeLive (Notre Dame), Ethos Medical (Georgia Tech),InnoHealth Diagnostics (FSU), and MIST (UVA) which captured first place.  The one-hour show, dubbed “The Battle of the Brains” is a talent search for top student innovators at the 15 colleges and universities that are part of the Atlantic Coast Conference (ACC) Academic Consortium. The competition plays off the spirit of the ACC, with an emphasis on big ideas.

MedUX’s product is a wearable, more potable solution to IV treatment, allowing users to abandon the IV pole — a delivery technology that hasn’t changed in 75 years.  Their invention, L-IV, a “liberating intravenous” product, uses both gravity fed and pressure infusion methods to allow infusion patients to remain mobile and active, while receiving treatment.  Developed at Invent@SU, and being commercialized with assistance from the Blackstone LaunchPad powered by Techstars at SU, the team has filed two provisional patents, and will now be filing a non-provisional patent to fully protect their work, while they work with a team of expert industry advisors and strategic partners to bring their invention to market.

The Blackstone LaunchPad powered by Techstars at Syracuse University Libraries coordinates the campus qualifier, and also mentors and coaches the teams that compete for the coveted title of top ACC inventor.  The Syracuse campus competition is supported by the Provost’s Office.