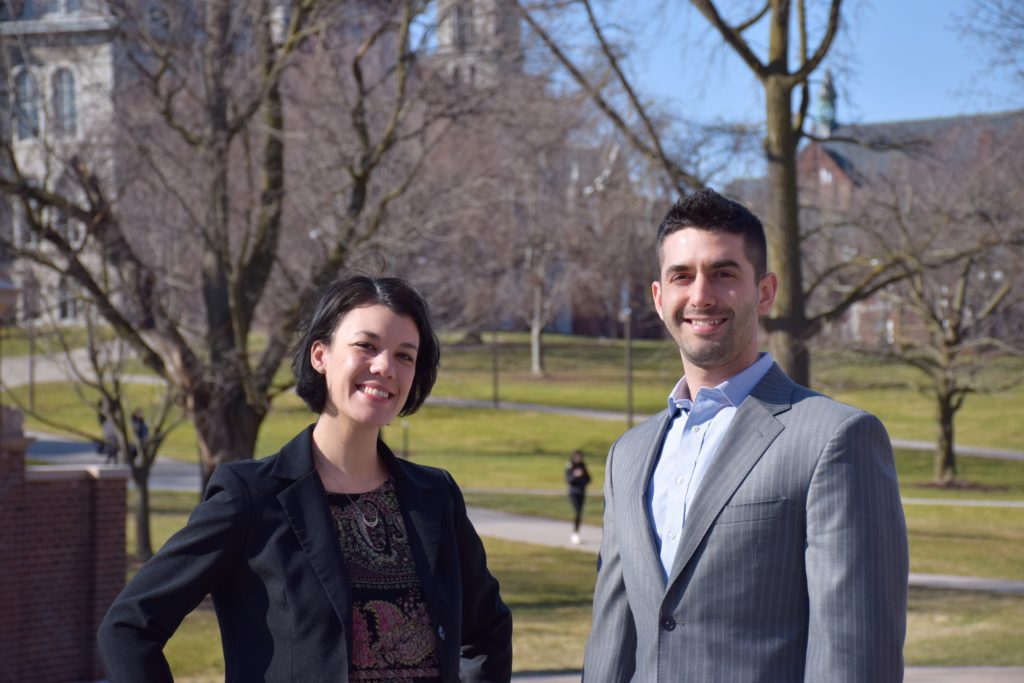 The newest brewery in town makes anything but beer. You seriously won’t be able to order any IPAs, ales, porters or lager beers made conventionally with gluten-containing grains like wheat, barley and rye. But you’re still in for a good time with a delicious drink.

Anything But Beer opened up shop in February selling alcoholic beverages that have the same alcohol percentage of regular beer, sold by the pint in bars and restaurants, and will give off the same carbonated sensation on your tongue. What’s different? Anything But Beer is able to satisfy the needs for any and all possible dietary restrictions.

“We create grain free beer alternatives from local fruits and vegetables to serve those who are gluten free,” co-founder Brittany Berry ’18,  VPA,  explains. Co-founder Logan Bonney, G’17, Whitman, adds, “Beyond dietary restrictions, which makes up a huge part of our audience, we just wanted to create an option for people who don’t really like beer, like me.”

Unlike the classic malted barley and wheat combination for classic beer, Anything But Beer opts for a base of local fruits and vegetables found right here in Syracuse, New York. This grain free and gluten free beverage is the latest addition to the craft brew industry in the area. Each drink has a unique flavor with different combinations of nuts, herbs, fruits and spices.

Berry’s favorite flavor is Midnight Hike with blueberry blackcurrant and Bonney’s is A Root Less Traveled with a spiced sweet potato drink. Anything But Beer is looking to launch a hot alcoholic average soon.

Berry is a Syracuse local who has lived in the area for about 23 years now. With a background in interior architecture and design, she is studying industrial and interaction design at the College of Visual and Performing Arts. Berry is no stranger to the entrepreneurial space at Syracuse University. After working with Bonney in his property management company previously, the two decided to team up during the summer of 2017 to make Anything But Beer a reality. Berry loves working within the Syracuse entrepreneurship community, she describes it as “a place where people can really create something you’re proud of. This network connects you to the right people and makes sure you have the freedom to explore what you want to explore.”

The resurgence in the food and beverage industry inspired co-founder Bonney to not only launch a new idea but collaborate with local companies, restaurants and bars. “Local breweries are a wealth of knowledge, we love learning from them,” Bonney adds. He moved to Syracuse to pursue a master’s degree in entrepreneurship and emerging enterprises at the Whitman School of Management. Originally from Long Island, Bonney always knew he wanted to be a business owner when he was growing up. After graduating in May 2017 and retiring from the Air Force, Bonney decided to pursue his passion for brewing as a hobby and launched Anything But Beer.

Today, Anything but Beer is working closely with InSourcing, a local business incubator run by Bob Herz. Their beverages are now available at Stout Beard Brewing Company on Westcott. Currently, the team is looking to bottling beverages and opening up a tap room. In the coming weeks, the team is gearing up to run more events and sales in the local area. Berry and Bonney are also looking to partner with new companies and build out their team. As they are applying to funding competitions and grants, they hope to hire interns from SU, especially those interested in social media and marketing.

The team won an award in the recent iPrize competition.

Constantly looking for ways to expand alcoholic beverage options for everybody, Anything But Beer is changing how Syracuse locals drink. Keep an eye out for their unique brews next time you are ordering a beer and check out their options on their website

If you are interested in interning, email contact@anythingbutbeer.com to join a fun and innovative team.