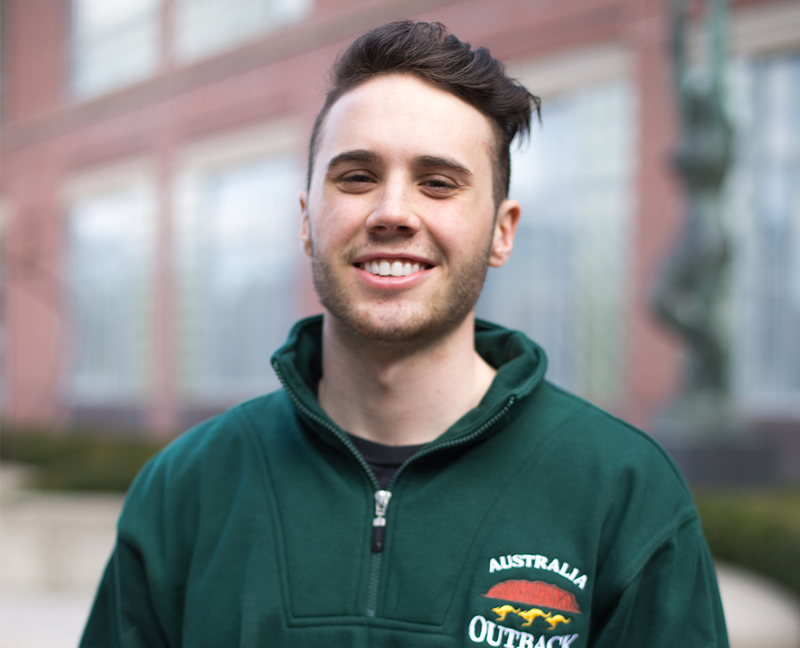 Kevin Rieck used to tell his mother he was going to go to college, start a company and then drop out. His father, who’s owned multiple businesses himself, was supportive. His mother, who’s worked a corporate job for decades, was not.

Rieck kept part of his word. While the Syracuse University junior hasn’t dropped out, he is now only a part-time student.

He launched Ravle, a film and travel company, a year ago. Next week, Rieck and Tay Lotte, a fellow SU student and co-founder of Ravle, will travel to the Student Startup Madness tournament at South by Southwest in Austin, Texas, as one of eight finalists.

The idea for Ravle came from Rieck’s personal passions: traveling and making films.

“My plan after college was just going to shoot films, travel films, and sell my itineraries,” Rieck, who’s from outside the Chicago area, said. “Like, I just want to spend a good year of my life not in the real world.”

Through research, Rieck found that most of the people watching travel videos are planning their own trips to the same destinations. They spend hours poring through websites and videos to prepare. Ravle streamlines this process, and markets itineraries created by “adventurous filmmakers.”

There are currently 10 trips on the website, including “Nara, Japan: The Ancient City” and “Peru: A Walk Back in Time.”

Rieck is a bit “obsessed” with his venture, spending probably 70 hours a week on it, he said. He tested one of the Iceland trips during winter break. He rented a sleeping bag and a car, and then spent three days by himself driving and camping through the Icelandic terrain.

But his self-starting nature isn’t anything new. Growing up, Rieck wanted to be an inventor, his family said.

“He’d always be building weird little things that were like a little problem that most people would just deal with,” said David Rieck, his older brother. “He would try and build something to solve these little problems.”

He had an “idea book” where he would record his thoughts, said Richard Rieck, his father, sometimes even in the middle of the night. One idea was to increase visibility for scuba divers — Rieck thought up contacts that could change the clarity of the water, Richard said, eliminating the need for a mask.

He learned to work hard at a young age. In high school, when Rieck wanted to switch from practicing gymnastics to playing basketball, he got up at 5:30 a.m. to dribble around his neighborhood, continuing his skill work as soon as he came home from school, he said.

“That was probably my first experience of learning how to work ridiculously hard to achieve something,” Rieck said. “I think that’s definitely a time of my life that instilled the type of discipline I have now.”

His day still begins early — most days he gets up at 6 a.m. to work out, said his friend and gym partner Alec Gillinder, a third-year industrial design student at SU. Before Ravle, Rieck spent a year working as a personal trainer.

When he’s walking, his headphones are usually on and he’s listening to an audiobook, but at double the speed because the readers are too slow. Books like “The 7 Habits of Highly Effective People” and “MONEY Master the Game” are some of his recent favorites.

Rieck finds his strengths through connecting with others. He can talk to nearly anyone, his older sister, Kelsey Rieck said. She added that one summer, Rieck drew a business contract with one of their father’s friends who had a warehouse of wood to sell. Rieck negotiated the listings and sold all the wood, creating an opportunity and friendship out of the experience.

Rieck lives in the moment, Lotte said. When the two were traveling in Germany, they missed their connecting train because Rieck was focused on taking photo footage behind the train station. The two extra hours, though, ended up giving them a chance to explore the small German town.

Lotte said Rieck’s drive and commitment to the company are some of his best characteristics. Lotte said her business partner shows up every day ready to put in work and still is able to help others.

“I think what’s really important is his ability to be a guiding compass because he does kind of inspire action just by leading by example,” Lotte added.

Rieck said he’s most proud of the team that he’s built with Ravle — of having people counting on him and devoting dozens of hours of work to the company. But this pressure is also driving him to be conscious of the team community he’s creating, Rieck said.

While his plans for Ravle include trying to get into a business accelerator this summer, Rieck said that in five years he hopes to be able to work “financially free” on projects he’s passionate about, like global climate change.

Rieck said he has many mentors, and many of them are digital and who he’s never met. But the philosophy of strongman Elliott Hulse stuck out for him. Hulse’s mindset has inspired him to forge his own path, one project at a time.