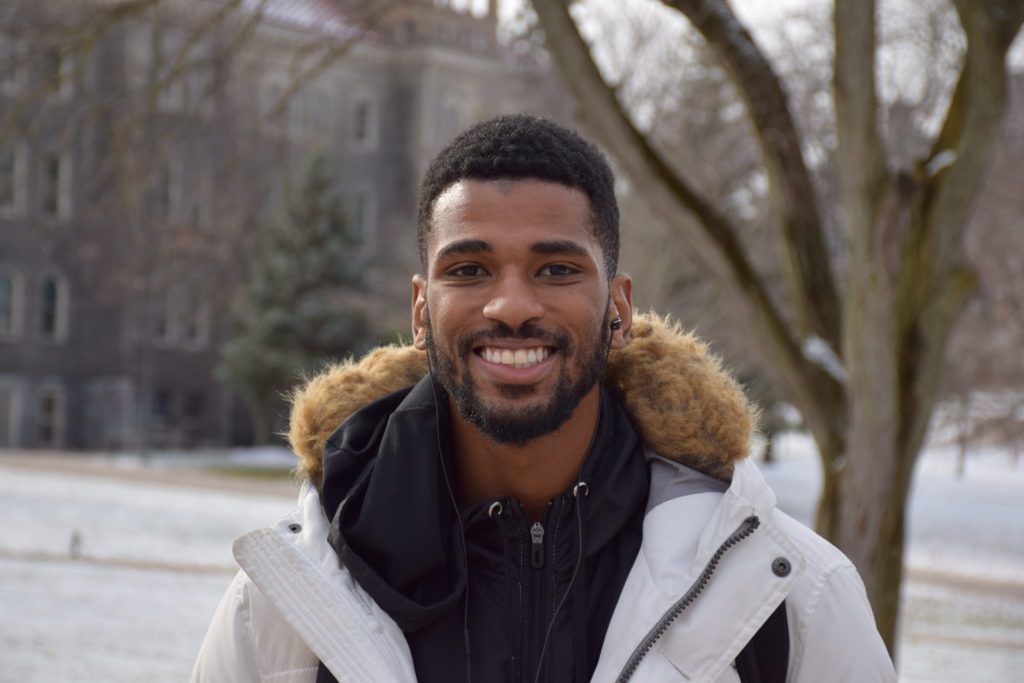 Jalen Nash has joined the Blackstone LaunchPad powered by Techstars at Syracuse University as a Global Media Fellow for Spring 2019.  In that role, he will become our chief storyteller, collecting, curating and publishing profiles of our entrepreneurs and their journey.  His first story is this one.  It’s his own.

“Life is a collection of stories, each moment, a word in a bigger plot. These moments come together to make up who you are in the present,” says Jalen.  “As an aspiring journalist, I will aim to identifying the moments that brought entrepreneurs into their present day. In this position as a Blackstone Global Fellow, I hope to illuminate the life stories of young entrepreneurs.”

Jalen notes that breakthroughs are not reached in a single moment. Every invention, startup or idea, is a culmination of millions of earlier moments. His mission will be to approach entrepreneurial storytelling from that perspective. He will not be writing profiles on entrepreneurs, rather, he will seek to uncover the stories behind their motivation.

As a child, Jalen spent hours watching news media, YouTube interviews and documentaries. “I spent my days captivated by stories of people, groups and movements. Each of these stories, gave me the opportunity to learn something essential,” whether it came from the hottest artist, a Fortune 500 CEO, or a random couple on the street. “Through these stories, I developed a spirit of inquiry, ambition and understanding, that has guided my life choices.”

Jalen was constantly surrounded by stories and experiences that encouraged pride in his blackness. Interestingly, he spent his elementary and middle school years in a Quaker, New York City, private school, as one of few people of color. “While I had many friends, as we grew older, it became more apparent that, although we could laugh together and enjoy “play-dates”, I was always on the outside looking in.” When the school day ended, his friends would walk a few blocks back to their midtown high-rises, while he would take the train back to his apartment in Flatbush. “An invisible barrier seemed to form between us, as real as it was artificial.” While he did not realize it at the time, this contrast set another foundation for who he would be.

Going from that environment, into a more diverse, Catholic high school was a big transition. The values like freedom, expression and individuality he learned prior, were replaced with lessons on discipline, responsibility and service. “While I enjoyed high school, I often felt restricted, both socially and academically.” While he had many “friends”, he struggled to find like-minded people who fully understood him. While he excelled in the material, he felt like the way they were taught stifled creativity.

“Because of this, for much of my youth, I battled the pressure to shift my story, to oblige what was acceptable in the current environment. It was a classic case of ‘fitting in’ versus ‘standing out’ and often, I would favor the former.”

This began to change as the college admissions time came closer. While most of his social circle didn’t spend much time thinking about it, Jalen grew up in an environment surrounded by images and expectations of college life. As an SU legacy student, he was raised with an understanding of the pride, and pedigree that comes with membership in Orange Nation. He remembers his application to this university as a direct culmination of the events in his life, saying “I was stepping into the next chapter of my life.”

“I can still remember the day I flipped the page, how the word ‘Congratulations’ leapt off my phone screen, the way my mother’s eyes lit up when I told her the news.” and the profound feeling of relief, honor and opportunity. In that moment, I was filled with hope for my future.

Coming to this school was a dream come true. It felt like the fulfilment of a destiny, like the climax of a movie. Crucially, that experience taught me the value of standing out.

Transitioning into college, my love for stories was deeply ingrained. I took this love, and categorized my interest into a Psychology major. While, he wasn’t as interested in its technical or scientific aspects, he was fascinated by its conclusions about human nature. By understanding these conclusions, he grew to understand the world around him.

Gaining more experience, Jalen began stepping into his calling. While the psychology classes were insightful, he yearned to understand things on a broader level. Time spent in a social psychology course opened his eyes to my next direction. While the psychology of the individual was interesting, it lacked the emphasis on application and action that he valued. “I was not just compelled by the thinking of individual people, but in how these individual people form and create change through larger groups.” By studying the actions of groups, he hoped to realize the keys to create tangible change.

Further realizations have led him to officially declare himself as a Political Science major. “As soon as I declared it, I knew it was the right choice. A career in politics felt like the product of each of my life’s experiences. Through it, I would be able to satisfy my interests- studying people, groups and their stories.”

He has enjoyed the classes in this major and learned so much. While classes have lived up to expectations, he often feels like lessonplans lack emphasis on the common individual- favoring big figureheads, large groups and advanced statistics. Something about it felt incomplete.

This understanding has gradually him to where he is today. “I love stories, and writers are storytellers. In this position, I have the opportunity to both listen to, and present new unique stories, something I have always valued coming from others.”

He wants to explore to stories, improve himself and make an impact on the lives of others. Both his psychology and political science majors, and each of the moments leading up to them, have prepared him to excel as a writer and an aspiring storyteller.

While he didn’t consider it much at the time, looking back, each part of his childhood environment was perfectly formed to inspire who he is today.

“I am grateful for every page of my life story. This is the beginning of a new chapter.”