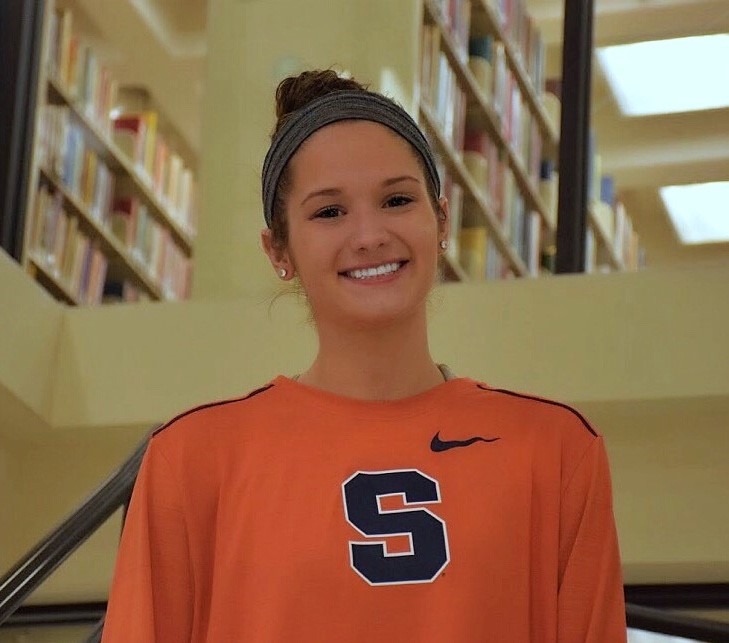 Jaclyn Hingre ’19 a mechanical engineer in the College of Engineering and Computer Science, was selected for the highly selective Values & Ventures Business Plan Competition, to be held April 5-6 at TCU, Fort Worth, Texas.  Hingre is the CEO of Halo, a personal safety device developed through the Invent@SU program.

Hingre ’19 and Annabelle Lincoln ’20 won second place and $3000 with Halo—a discreet and portable emergency alert system designed for students who need help on or near a college campus. Halo does not require a cellphone or internet service, using radio frequencies and small wearable transmitters to alert public safety in an emergency.

“Being able to represent Syracuse University in TCU’s Richards Barrentine Values and Ventures Competition is an opportunity that I’m really looking forward to,” said Hingre.  “I’m thankful to the Whitman faculty for seeing the potential in HALO and allowing me to be able to participate in such an incredible event.”

“This year we had a record amount of applications,” said Matt Smilor, Director of Values and Ventures Program, Neeley Institute for Entrepreneurship & Innovation, Texas Christian University.  Each spring, TCU invites students from around the world to pitch ideas for conscious capitalism ventures that make a profit while also solving a problem. Winners take cash prizes to help make their ideas come true.

All teams are eligible for these special cash awards.

The competition will be April 5 and 6, 2019, concluding with the Bolin Innovation Forum featuring Jesse Itsler, an awards ceremony and reception for all participating students and faculty.  Itsler is the author of the New York Times bestseller, Living with a Seal, cofounded Marquis Jet, the world’s largest private jet card company which he and his partner sold to Berkshire Hathaway/NetJets. Jesse then partnered with Zico coconut water, which he and his partner sold to The Coca-Cola Company.

He is a former rapper on MTV, and wrote and performed the NBA’s Emmy Award-winning “I Love This Game” music campaign and the popular New York Knicks anthem “Go NY Go.” When he’s not running ultra-marathons, eating vegan food or being a dad to his four kids, Jesse can be found at the NBA’s Atlanta Hawks games, where he’s an owner of the team. He is married to Spanx founder Sara Blakely.