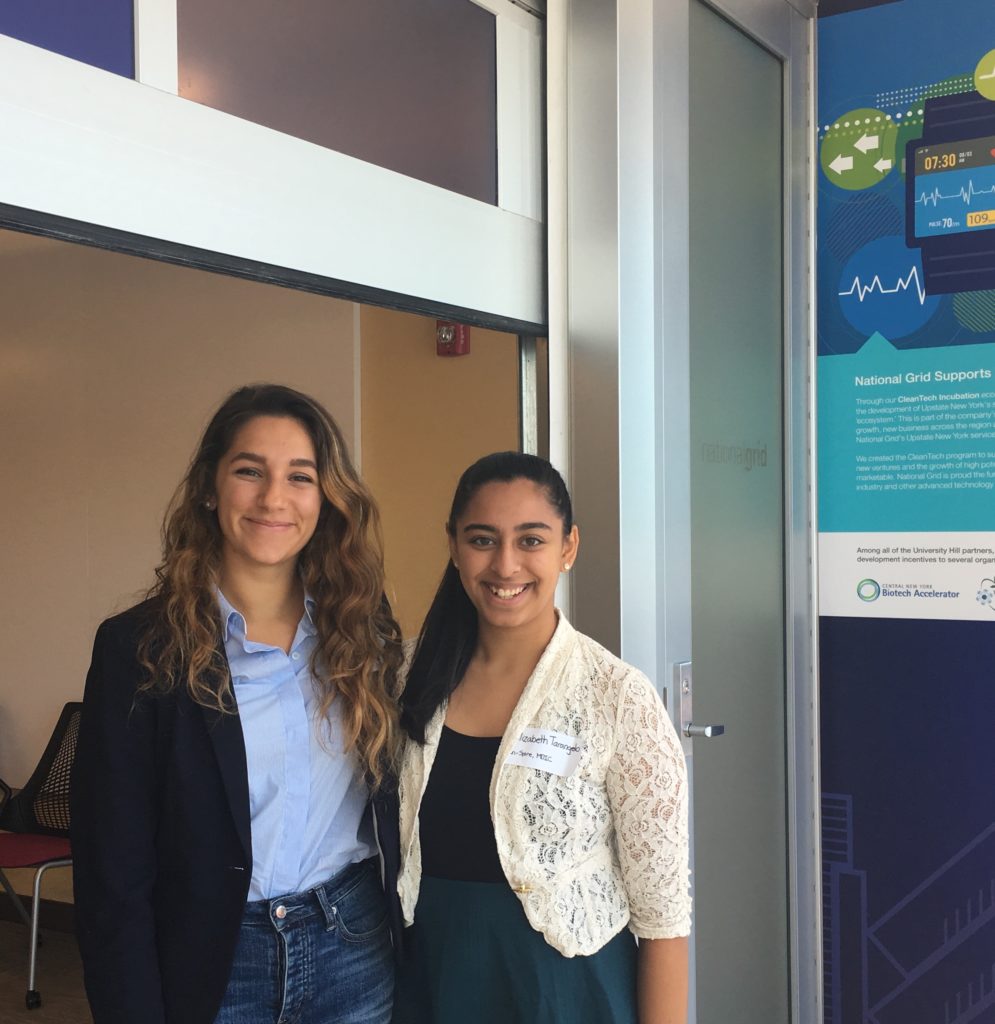 Before teaming up at the Invent@SU Invention Accelerator at Syracuse University this past summer, College of Engineering and Computer Science students Elizabeth Tarengelo ’19 and Kayla Simon ’19 were already dedicated women of science, sisters of engineering sorority Alpha Omega Epsilon and above all that, close friends. It wasn’t until during the six week Invent@SU program last summer, Tarengelo and Simon knew they were onto something bigger than what both of them had imagined.

Now, they are fellow entrepreneurs who are creating and commercializing a biomedical device called In-Spire that provides asthma medication on-the-go. And they are winning awards along with the way for their innovative concept.

In the spring of 2017, Tarengelo was in EEE370. It was during this class that she developed an interest for management, now her minor, and a love for entrepreneurship. Her personal experience with asthma and constantly forgetting to carry her inhaler got her thinking during the class.  How could biomedical devices be designed in ways that could be better integrated into people’s lives?  Was there an alternative to carrying her asthma inhaler around, and not always having it handy when she really needed it.

That following summer, Tarengelo spent her summer living in Staten Island and taking the ferry into Manhattan, then the subway to the Invent @ SU program in NYC.  After two asthma attacks caused by running from the subway station to the ferry, Tarengelo decided it was time to combine her two passions:  social entrepreneurship and engineering.  She and Simon, also in the program, took on the challenge.

They won first prize and $5,000 in the NYC-based Invent@SU competition for their work that summer, working with mentors and subject matter experts, prototyping, iterating and pitching their concept.

In-Spire is an inhaler, but a quarter of the regular size, integrated into a wearable, active wristband. The design is elegant and more convenient than a conventional inhaler. Containing a bite pad that activates the medicine when you bite down on it, the device is smart and user-friendy.

With a provisional patent filed, the In-Spire team went on to tie for first place in the recent Syracuse University Impact Prize competition, and is competing on February 16 in the ACC InVenture Prize campus competition.  They will also be pitching their idea for seed funding through the Panasci Business Plan Competition and the iPrize this spring to help them achieve next milestones which are completing their beta prototype, testing, the FDA approval process and final patent application.  After achieving those milestones, the team will seek to license their technology to a company in the pharmaceutical or medical device industry that commercialize it, working with a manufacturer and distributor.  And then they plan to explore more on-the-go medications that can be adapted into the In-Spire device, such as cold medicine.

Come to one of the campus competitions to watch them pitch.  Or, stop by the the College of Engineering and Computer Science or the Blackstone LaunchPad and get to know this incredible team of women engineers who are changing the game as #FemaleFounders.

Invent@SU, supported by Bill and Penny Allyn, trains undergraduate Syracuse University students to “design, prototype, and pitch” as they invent tangible products. Powered by Invention Factory, this immersive, six-week program is held on the SU campus and at the SU Fisher Center in New York City.  Invent@SU follows a proven method of developing students’ abilities to innovate and communicate. Students learn about design, ideation and intellectual property, then conceive an original invention, prototype the invention, and refine it in response to weekly feedback from diverse audiences of guest evaluators. The program will take place May 14 – June 22, 2018 at the Fisher Center in NYC and July 2 – August 10, 2018 on the SU campus. The application deadline is February 28.