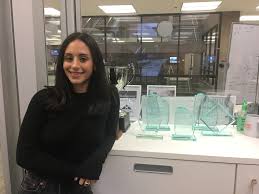 Julia Haber ’18, founder of WAYV, a venture she started as a student at Syracuse University, has closed on $20,000 in seed funding from the Dorm Room Fund to create immersive experiences that connect brands directly with students in dynamic ways, in their own backyards.

As a student, Haber studied how Millennials and Gen Z create content and influence on social media, including interning at Snapchat in Los Angeles.  That led her to creating WAYV – a venture that tricks out spaces as immersive popup retail spaces to give brand partners unique spaces to engage with college students who are influencers in fashion, technology and other sectors.  Haber worked with the Blackstone LaunchPad powered by Techstars and the Center for Digital Media Entrepreneurship at Newhouse to win second place in the Panasci Business Plan Competition for WAYV, and launched with a beta project with Rent the Runway this past April at Syracuse University.

From there, Haber incubated WAYV at The Wing in Soho (pictured above), a network of community work spaces designed just for women entrepreneurs.  Now, she is taking her idea to college campuses and building audiences of influencers engaging them in immersive popup experiences.

Haber firmly believes that there is nothing more meaningful than in-person communication. “Millennials and Gen Z really love the popup shop culture because they crave sharing and participation with brands.”

As one of the pioneers of student entrepreneurship on the Syracuse University campus, Haber was no stranger to the popup shop culture. She organized the very first student popup shop in 2015 co-sponsored by AT&T. Serving as a retail space for students and retailers to open temporary stores in Marshall Square Mall, the project was a huge hit. Haber also started VISION, a creative club that allows students to explore innovative ideas. The club catalyzed the Bump the Mumps event last fall and engaged with more than 20,000 people in just two hours. At the height of the mumps outbreak on the SU campus, VISION provided care packages including hand sanitizer and hot chocolate. Bump the Mumps was an incredible VIRAL event that educated the student body on good hygiene practices to prevent mumps from spreading further.

To say that Haber is deeply rooted in the entrepreneurial space at SU is an understatement. In 2015, when she was just getting to know the resources SU had to offer as she was putting together the popup shop in Marshall Square Mall, she realized there had to be better way to unite the different entrepreneurship programs into one place. Working with campus entrepreneurship leaders in the following months, she became the student brand ambassador that helped Syracuse secure designation as a Blackstone LaunchPad by the Blackstone Charitable Foundation.  She traveled to NYC for the funding announcement in fall 2015, and was there to help cut the ribbon in April 2016, when the Blackstone LaunchPad at Syracuse University opened its doors.

SU alumn Dylan Gans ’18, brought Dorm Room Fund to the SU campus as the president of the Blackstone LaunchPad Student Advisory Council.  Gans, who is now director of Business Development at Good Uncle, was instrumental in creating the partnership with Dorm Room Fund  to provide mentoring to the most promising student startups launched at Syracuse University, as well as consider seed funding.

The Dorm Room Fund Campus Organization Network (DRFCON) is backed by First Round Capital, a San Francisco-based venture capital firm founded in 2002 that provided seed-stage funding to technology companies such as Uber, Square and Warby Parker. First Round provides seed-stage funding and focuses on portfolio companies’ growth during their first 18 months. It has offices in San Francisco, Philadelphia and New York. The company publishes First Round Review, a blog with industry experts on management and operations best practices. Fortune Magazine dubbed it the most connected venture network in the Silicon Valley.  In 2012, the firm launched and funded Dorm Room Fund for college startups.

Since launching, DRF has invested in 150 startups where at least one person on the founding team is a student (undergraduate or graduate).  Those ventures have gone to raise $300 million from partner funds.

Gans was a dual major at the Whitman School of Management and Newhouse School of Communications at Syracuse University, majoring in finance and minoring in public communications.  As a student he worked with the LaunchPad to build an organizational framework to launch, grow and sustain the program.  His experience with data analytics, building strategies for startups, founding organizations, putting philanthropy and community service events together, financial modeling, brought founding value to the program.

Both Haber and Gans are part of the LaunchPad’s prestigious Founders Circle.