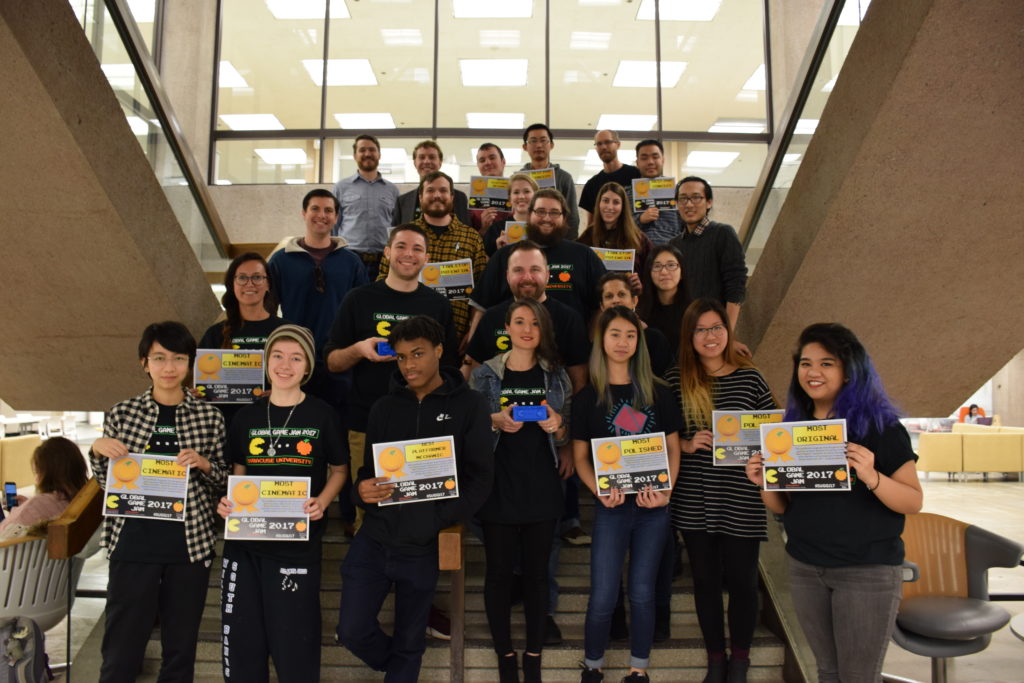 This year’s game jam theme was “Waves,” with enthusiastic Syracuse University students from across many academic disciplines forming teams to create working prototypes of video, mobile, web-based, iOS/Android, board, card, tabletop, and other “wave-themed” games.

At the conclusion of the jam, teams presented their game concepts to judges who are area professionals in the game industry.  Teams were recognized in categories such as biggest blockbuster potential, most cinematic, best player interaction, and best platform game mechanic.

Judges included SU alumnus John Spatola ’07 (Mechanical Engineering and Computer Science) who is founder, owner, and CEO of at Lake Effect Applications.  He was joined by Lisa Spatola ’08, HR Director, and Josh Burns, 3D Animator of the company which creates mobile experiences for core gamers.  Other judges were Angelo (AJ) Damiano ’18 (Whitman School of Management), founder of Power-Spike, a Syracuse University student startup in the game industry, and Glenn Allen G’01 (Systems and Information Science), who is an expert in software development and design.

More than two-dozen students took on the seemingly simple theme, working on the concept of waves from the perspective of science, art, technology, nature and the built environment.  They embedded the concept at many levels of game creation, from audio, graphics, code, and gameplay, as well as thematic aspects.

Jammers at work in the LaunchPad

Games by SU students were uploaded on the official website, http://globalgamejam.org/, to be shared with more than 36,000 jammers in 702 sites across 95 countries.  More than 7,000 new games were created worldwide that weekend by artists, musicians, coders, designers, writers, producers and other creative talent.  Games took the theme in many directions, both literally and figuratively.  Game concepts spanned desktop PCs, handheld touch screens, eye-tracking, virtual reality, physical electronics and paper-and-cardboard tabletop games. All of the games produced in the event are open source and can be accessed on-line and played at http://globalgamejam.org/2017/games

The event, organized and coordinated by Syracuse University’s Games Studies Research Group, brought together two new SU Libraries programs, The Digital Scholarship Space (DSS) and the Blackstone LaunchPad. The DSS is a pilot project by Syracuse University ITS that provides students and faculty access to a variety of technologies for software design, gaming, data visualization, digital humanities projects, and digital mapping.  The Blackstone LaunchPad is an experiential learning service center, connecting Syracuse University’s innovation ecosystem with a global network that provides support for aspiring entrepreneurs.