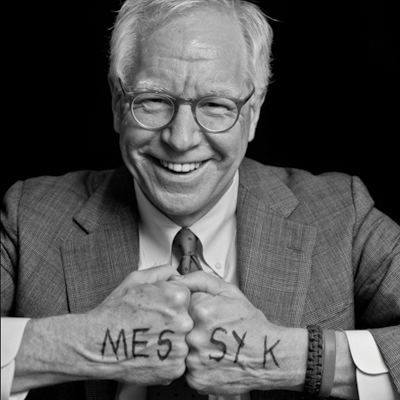 The first-ever campus wide Global Entrepreneurship Week celebration kicks off at Syracuse University with a keynote opening address by its founder, Carl Schramm.  The opening event, “The History of Innovation,” will be Monday, November 14 from 12:30 to 1:30 p.m. in the Peter Graham Scholarly Commons at Bird Library, followed by a networking reception in the Learning Commons.

Global Entrepreneurship Week (GEW) is a celebration of innovators who launch startups and bring ideas to life. For one week each November, the world’s largest celebration of entrepreneurship inspires people around the globe to explore their potential as self-starters and innovators.  With activities ranging from large-scale competitions, to intimate networking and meetups, lectures and panel discussions, film screens and meetings with investors, aspiring entrepreneurs are introduced to possibilities and exciting opportunities.

World leaders, local communities and colleges and universities around the world have embraced the campaign as a way to fuel ideas by high-growth startups, making GEW a truly global platform for connection and collaboration.

Representatives from 37 countries were on hand when GEW was announced in 2007 by Jonathan Ortmans, president of GEW, Carl Schramm, former president and CEO of the Kauffman Foundation and Gordon Brown, former prime minister of the United Kingdom.  The event has now grown to 160 countries, 20,000 partners and 10 million people.

Dr. Schramm is recognized internationally as a leading authority on innovation, entrepreneurship and economic growth.  The Economist has referred to Schramm as the “evangelist of entrepreneurship.”  In 2007 Schramm, and then British Prime Minister Gordon Brown, created Global Entrepreneurship Week, now observed in 160 countries.  His 2010 essay in Foreign Affairs initiated the study of expeditionary economics.

Dr. Schramm’s academic career began at Johns Hopkins, where he founded the nation’s first research center on healthcare finance.  He has founded or co-founded five companies, including HCIA and Greenspring Advisors, a merchant bank.  Schramm also has served in major corporate roles including EVP of Fortis (now Assurant) and CEO of Fortis Healthcare.  He has served as a member of the Science Advisory Board of Mars, Inc.; advised major corporations including Ford, J&J, and Apple; and served as a director of two public companies.  He has been a member of the Singapore Prime Minister’s Research, Innovation, and Enterprise Council.  He chaired the U.S. Department of Commerce’s Measuring Innovation in the 21st Century Economy Advisory Committee and was a member of the President’s National Advisory Council on Innovation and Entrepreneurship.

He is a founding member of the Board of the International Intellectual Property Commercialization Council, a U.N. recognized NGO, headquartered in Hong Kong; a trustee of the Templeton World Charity Foundation; and, a Council Member of the National Academies of Sciences’ Government-University-Industry Research Roundtable.  He has served as a trustee of the Kauffman Foundation and the Milbank Memorial Fund.

He has authored, coauthored, or edited several books including Better Capitalism; Good Capitalism/Bad Capitalism; Inside Real Innovation; The Entrepreneurial Imperative, and Controlling Healthcare Costs.  Burn The Business Plan is forthcoming in 2017.

Dr. Schramm is a Batten Fellow at the University of Virginia and has served as a visiting scientist at MIT.  He serves on the board of the Tusher Center for Intellectual Property at UC Berkeley.  He was the inaugural Arthur & Carlyse Ciocca Visiting Professor of Innovation and Entrepreneurship at UC Davis in the academic years 2013 and 2014.

He holds a Ph.D. in economics from Wisconsin where he was a Ford Foundation Fellow and a New York State Regents Graduate Fellow, and earned his law degree at Georgetown.  He held two consecutive Career Scientist Awards from NIH, and was a Robert Wood Johnson Foundation Health Policy Fellow at the National Academy of Medicine.  He holds five honorary degrees and the University of Rochester’s George Eastman Medal.  He is a member of the Council on Foreign Relations and a Fellow of the Royal Society of Arts.

Prior to the opening address, Dr. Schramm will be filming a video documenting the launch of Global Entrepreneurship Week, and how it rapidly scaled to global adoption.  Blackstone LaunchPad Global Media Fellows will be filming and producing the short documentary.