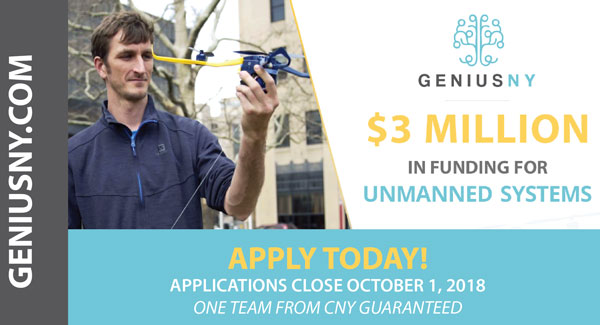 GENIUS NY promotes itself as one of the most effective business accelerator programs in the world for the unmanned systems industry. GENIUS NY round three is now accepting applications until October 1, and will begin in January 2019.

The success of the program’s first two rounds has helped the program grow in popularity and attract teams from around the globe. Thanks to unprecedented investments from New York State, the program is now adjusting the investment structure to create even greater impact for companies in the program, ultimately strengthening the region’s unmanned industry cluster.

During round three, five finalists teams will now compete for a total of $3 million in direct investment funding, with one grand prize of up to $1 million and four $500,000 awards. Previously, the program awarded three grand prizes of up to $1 million, $600,000, and $400,000 and three runner-up prizes of $250,000 with $250,000 available for follow-on funding. Doubling the investment for the finalist teams will provide them even greater opportunity to succeed and grow their business in Central New York.

We believe this new investment structure will attract technology startups to the region that are further along in their life-cycle, decreasing the risk profile as we are providing a significantly larger investment to each team. The increases in awards will also result in a larger budget for companies to hire new employees, develop their products, and achieve revenue and follow-on funding goals sooner. As these companies grow and evolve they become more integrated in the region’s larger efforts to strengthen its position as a global leader for the unmanned systems industry.

Over two years, the program has invested nearly $6 million in 12 high-quality teams. Today, half of the first round teams still have private offices in The Tech Garden, and all teams continue to benefit from the region’s multi-dimensional ecosystem that combines technology, innovation, standards and certification and public policy.