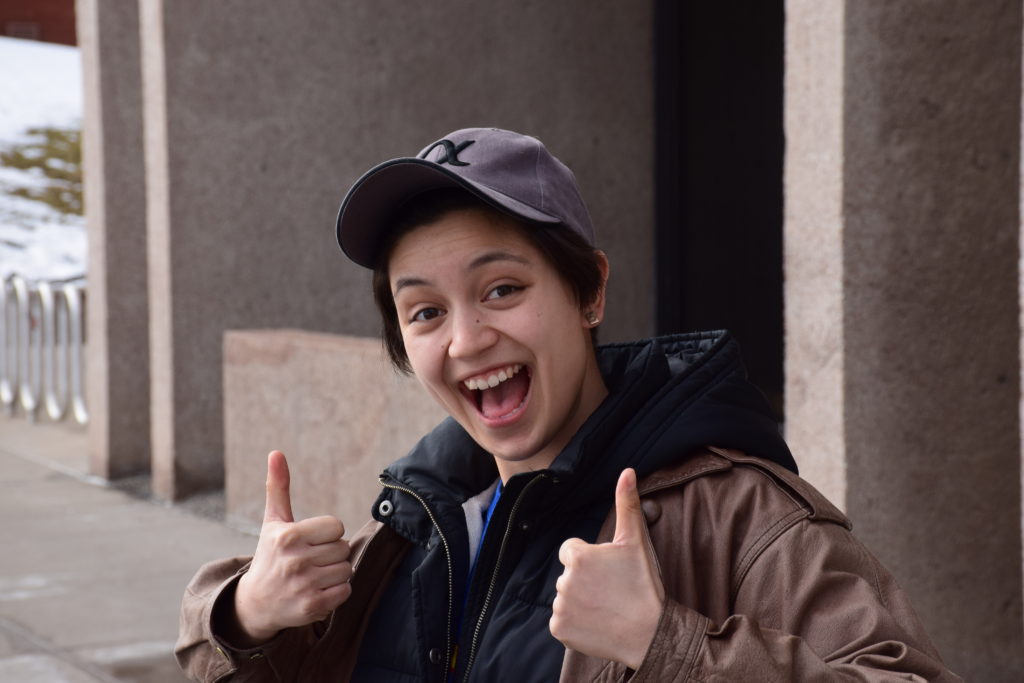 Erin Miller is “obnoxiously obsessed” with Twitter, loves movies, and is an amazing storyteller. You can often find her wandering around the iSchool, popping into the LaunchPad, or sending creatively written cakes. Spend just two minutes with Erin and you will know she is a creative soul.

Erin, who is from Pinole, CA in the Bay Area, is a 2016 graduate of the S. I. Newhouse School of Public Communications with a degree in advertising and a minor from the School of Information Studies.

If you ask Erin to tell you about herself she’ll pause and think awhile.  But if you ask her about what she likes to do, you’ll see her face spontaneously light up. Erin once got kicked off Twitter for tweeting too much.  Each year she has a goal of watching 100 movies.  As of the beginning of March, she was at 36.

Erin is currently “capitalizing on her youthfulness” by working for the iSchool as a self-titled “Innovation and Immersion Recruiter.” She helps to structure and market the iSchool’s immersion trips to Silicon Valley, New York City, Portland, and other major cities around the US.

Outside of working at the iSchool, Erin is a co-founder of Out There Productions, a media accelerator and production company. She is best known for operating out of a renovated school bus and traveling counterclockwise across the United States.

Out There Productions handles anything on the media production side for small businesses. The team, composed of three SU grads, also produces short films. Their first one, No Nuts, comes out this summer.  The film is about a summer camp for kids with peanut allergies.

No Nuts was filmed in Syracuse and casts kids from the local neighborhoods. Out There Productions took the opportunity to not only create the film, but to teach kids a little something as well. The team taught the children in the film about production, character development, and social issues– like gender equality and consciousness of pronouns. Erin says the team “wants to produce socially conscious films on a shoestring budget.”

Erin started out making films with her brother when she was young but didn’t think much of it until she was a student at SU. A friend of hers was starting his own venture and asked her to make a quick promo video for him. That video helped him to raise $4 million. She noticed that judges in business competitions wanted videos and that they were good visual aids for the new companies to use elsewhere. She wanted to help startups get their ideas “out there,” birthing the name Out There Productions.

Erin never thought much about being an entrepreneur but when she reflects, realizes she had always been one. To afford her movie obsession, in high school she would make stovetop popcorn in the morning, and go around the building selling bags of it to kids along with comic books she had created. She’s that kind of natural pitch artist.

She is a self-described entrepreneur, advertising specialist, and artist. “With a passion for creative storytelling and a knack for making connections, I plan to make my way in the world through creating honest, moving, and shareable content to get awesome ideas out there.”

Anyone who knows Erin describes her as super smart, creative, adventurous, eccentric and undaunted.  And that is what we all love best about her.

Check out the digital nomad movement at otpros.co