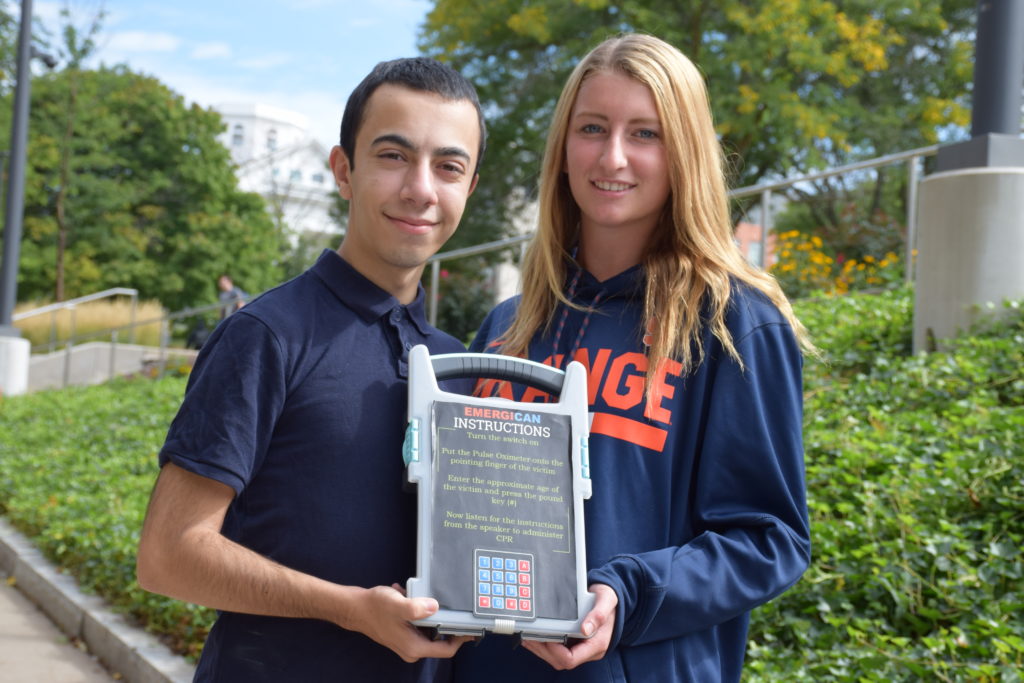 When most people ride on the New York City subways, they are usually not thinking of their next big invention.

So, when Caleigh Casey ‘21 jumped on the train and began reading the newspaper on the way home like any other day, she wasn’t anticipating finding a solution to such a massive problem.

While on the subway that day, Casey read an article about the opioid epidemic in the United States, and was shocked to learn that it has only gotten worse over time. With that came a wave of research and a desire to help those who suffer from opioid overdoses.  Casey thought, “There aren’t many solutions to this problem. The government right now provides two solutions, both of which contain opioids. There has to be better options.”

Hopping off the subway, Casey and her Invent@SU partner Malkiel Asher ‘21, two College of Engineering and Computer Science students, were incredible excited to hit the ground running to design a potential solution.

The two worked together at the Invent@SU Accelerator program at the Fisher Center in New York City this summer, a 6-week immersive invention experience that teaches students to design, prototype, and pitch solutions to problems called “pain points.”

The pair ideated Emergi-CAN, a device that aids those suffering from opioid overdoses by making Narcan, an opioid antagonist used for the reversal of opioid overdose, more accessible.

It works like an AED, or an Automatic External Defibrillator, which is a lightweight, battery-operated, and portable device that can perform shocks to the heart for people having sudden cardiac arrest. The device was also created in order to simplify the process of others aiding in overdose by having the device read out clear and concise instructions.

Asher says, “When you open it, it tells you the instructions audibly and as simply as possible.”

Casey and Asher were able to develop their prototype and pitch skills throughout the Invent@SU program, working tirelessly to make sure that their invention was developing into the most helpful device possible for others.

Despite working so hard, the two noted that they completed each other as an invention team, which skills that matched perfectly, and allowed us to be on top our game. This combination of skills gave them the opportunity to tackle difficult challenges, which included a plethora of engineering problems, both mechanical and electrical, plus being able to clearly express their idea to judges during weekly feedback pitches.

But, none of this work came without reward. “The biggest a-ha moment was when we actually figured out what we were doing,” Asher said. “When we got the motor working, we realized that this might actually work.”

Next up for the team is working with the Blackstone LaunchPad on customer discovery and a commercialization roadmap.  They will also be competing to raise seed funds to help file a non-provisional patent application.

When asked about advice to next year’s Invent@SU class, the two were quick to say, “Don’t panic.” While six weeks may not feel like a long time, it had propelled these two SU students into the world of entrepreneurship, and they are excited about where the journey will lead.

Who knew a New York City subway ride would spark an idea for a potentially life-saving device?

Meet these two inventors and engineering students at the Blackstone LaunchPad, pitching in competitions, or around the College of Engineering and Computer Science.  Be sure to ask them more about Emergi-CAN, and their goal of saving lives.