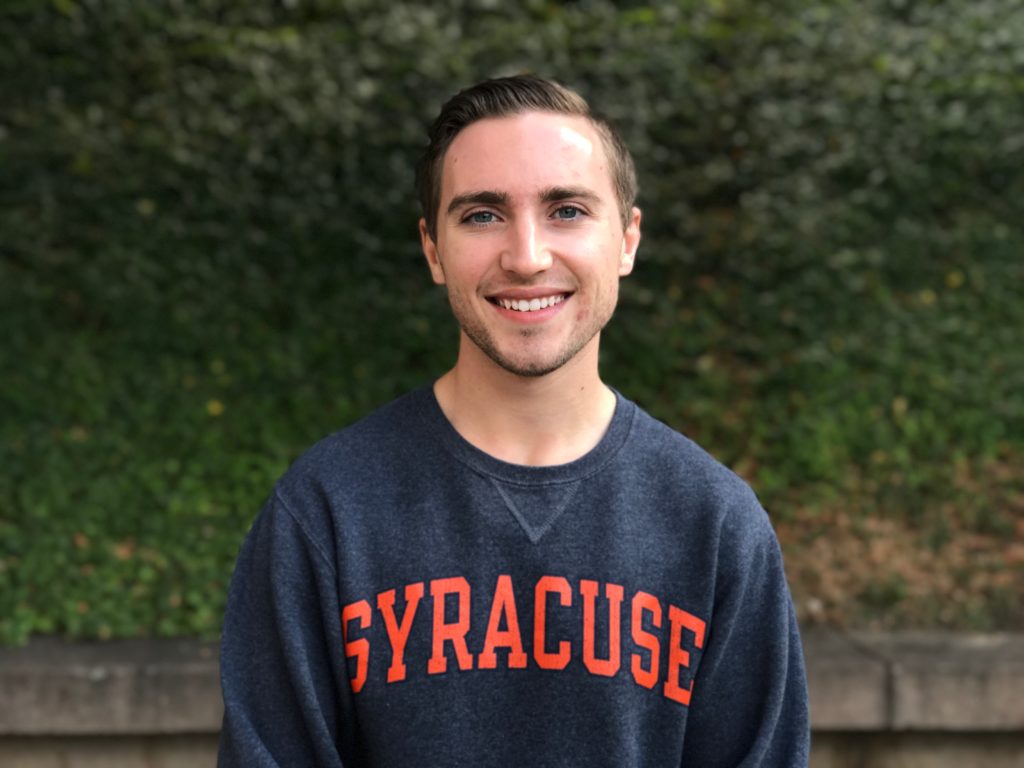 David Fox had a milestone this week.  He published the 50th issue of Startup Thinking, that awesome newsletter you receive each Tuesday about all things innovative at SU. If you’ve ever wondered about the behind the scenes work that goes into each issue, look no further than David and his LaunchPad team of student writers and photographers.  He’s also the publisher of this weekly Thursday Startup Spotlight newsletter profiling entrepreneurs, and creates many of the videos for our student ventures.  So we thought this is the perfect week to shine the spotlight on David.

Entrepreneurs are motivated and creative individuals, and David Fox is definitely one of those individuals. He is behind many of the innovative projects coming out of the LaunchPad, and has been actively engaged with the #WeAreEntrepreneurs campaign here at Syracuse.

Growing up in Jackson, New Jersey or as it’s better known, Six Flags Great Adventure, New Jersey, David was a leader.  He was very engaged in service activities as an officer of Key Club, a volunteer club for high school students where he was vice president as a sophomore and served as president his junior and senior years.  He gained 300 hours of community service and learned valuable leadership skills that made him a better entrepreneur.

He began that journey at SU in The Whitman School of Management and as a sophomore realized that he wanted to be immersed in a technical field and moved to the School of Information Studies to study Information Management and Technology, where he currently continues his studies as a junior.

David, a self-proclaimed jack of all trades, can typically be found working on constructing and publishing the weekly newsletter– Startup Thinking, filming a visually stunning promo video, tweeting about entrepreneurship, or wearing a pair of funky socks. If you were to ask him about his favorite part about working inside the giant glass box David would be quick to reply with, “The people– whether it’s the people who already work here or the entrepreneurs who walk in. There is nothing more motivating than watching other people succeed.”

After working in the LaunchPad for nearly a year David has finally decided to start his own company, Necessity Apparel. He has teamed up with another Blackstone LaunchPad Global Media Fellow, Victoria Lawson, to create a clothing line with what he says is a “beach aesthetic.” His plan includes donating 10% of the profits to the organization, Charity Water a company he had worked closely with in high school that provides clean drinking water to developing countries.

David, who has always wanted to start his own business, got the idea for an apparel company after extensive research. He had originally planned to start a nonprofit, but after learning more about that regulatory framework of that structure, quickly moved to the next best thing– a company that accomplishes social good.  He’s approaching his venture from a triple bottom line perspective.

He’s working on the steps to help bring Necessity Apparel to an official debut later this year. David is just about ready to finalize a manufacturer, so, keep your eyes peeled.

David says an entrepreneur is someone who “knows a lot about a lot of things,” – an accomplished generalist with an inquisitive mind who is always exploring ideas.  That’s something he really embodies, but the LaunchPad thinks he has some superpowers.  You see them every Tuesday when you get your weekly issue of Startup Thinking, and you’ll see them soon when Neccesity Apparel launches