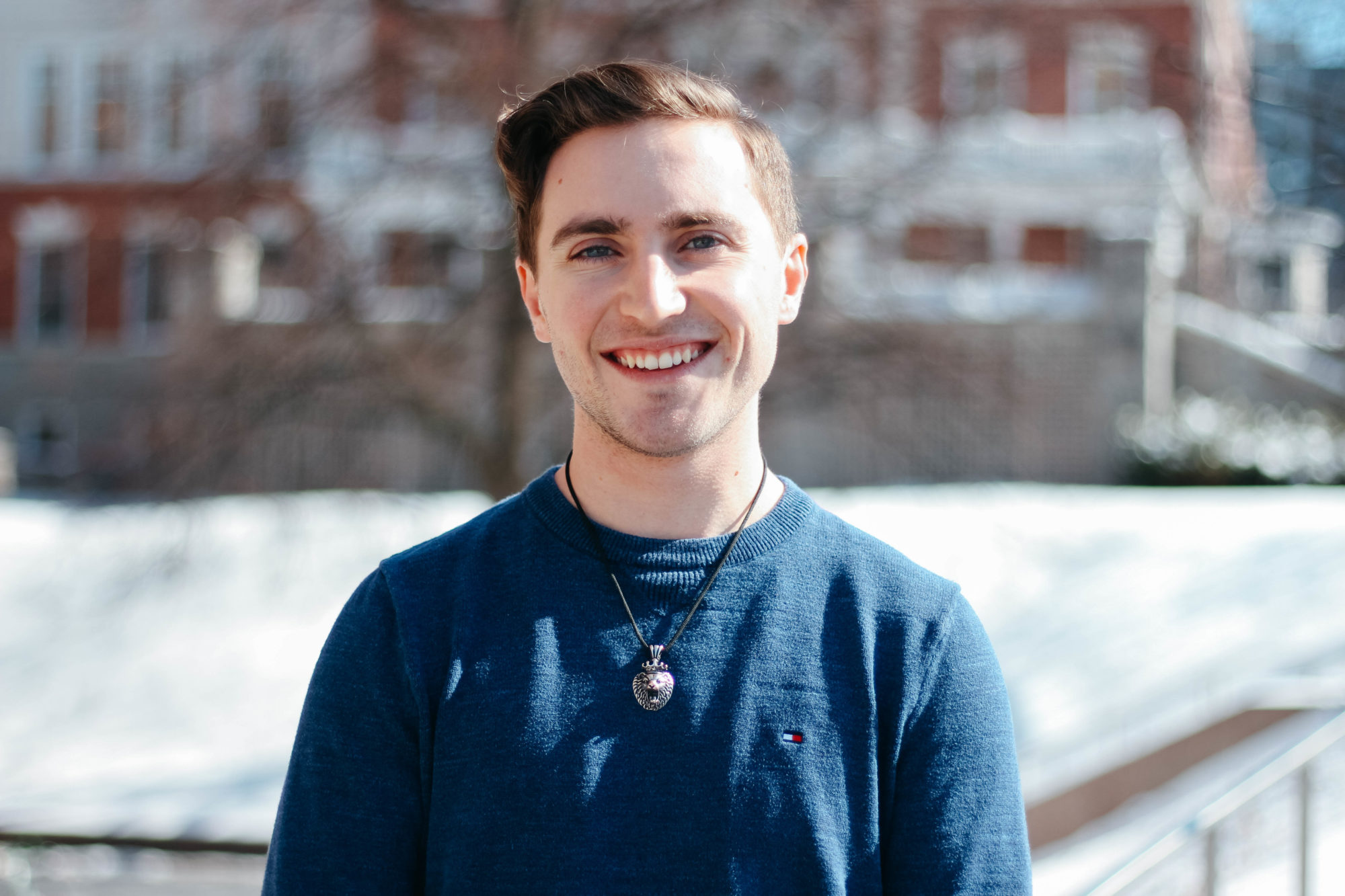 “If I had to point out one thing that stands out about David Fox, it’s his energy,” says Jalen Nash, who works with David in many student organizations.  “I remember one meeting we had together for one of our student groups. In this particular meeting, our peers were complaining about a lack of dedication and attendance. They were blaming students, blaming the new rules, and blaming each other for at least 30 minutes.”  That’s when Dave took control. “It doesn’t matter whose fault it is. What does matter is that we’re the leaders of the organizations, so it is our responsibility to make things right moving forward,” Jalen recalls David saying.  “In that moment, I saw who Dave is: a leader, a visionary, and someone who will always keep moving forward.”

That sums up David, says Jalen.  As David is fond of saying,  “I understand that my role isn’t to be the best person in that room. It’s to be the one who makes everybody else better.”

Jalen: Tell me about your childhood.

David: I grew up in Jackson, New Jersey, a pretty rural area, so I spent most my childhood playing sports. I kind of just had a normal childhood. A lot of outdoor stuff, wasn’t much of an inside kid. You know, going outside, playing football, riding bikes around the neighborhood, stuff like that.

Jalen: So with that outdoors background, how do you start to develop your interest in “indoor industries” like technology and web design?

David: It’s interesting. I was an outdoor kid but I just always gravitated towards technology. I think the biggest advantage I got from being outside was in a lot of the sports I played. I learned how to work on teams early, and I inevitably became a team leader.

So when I moved to getting jobs and starting to figure out what I want to do in life, being able to find myself in a leadership position, in technology, has always been that dream for me.

I’ve taken steps towards achieving that, trying to combine something that I love with my own attitude and demeanor. I love to take the lead on things and be the person pushing the edge and going forward.

Jalen: Do you remember the first computer you ever got?

David: I remember the family computer which was this big, white, dinosaur computer.  That thing was amazing. But once me and my brothers started filling it up with viruses, we started getting laptops individually.

I bought my first laptop in high school with money from bussing tables at a pizza place. I just saved up five or six hundred dollars and I bought myself a laptop.

Jalen: And was that laptop your introduction into technology?

I started really getting into technology when I was about 14 because of smartphones. I went from my Samsung Galaxy S3 to the Samsung Galaxy S4, which was such a jump-up technology wise. This new phone was significantly faster, cleaner, better… that’s when I start to worry about processors, manufacturing of technology and how the trends are shaping the industry. I fell in love with the idea of how fast-paced and innovative the technology sector was becoming.

Jalen: So with that early love starting in high school, why did you decide to go Syracuse University?

David: Interestingly enough, I didn’t come to SU as an IT major. I came here as an entrepreneurship major in Whitman, but quickly rediscovered my love for technology, and decided to follow that passion.

Jalen: That makes a lot of sense. So talk about that switch then, from entrepreneurship to IT.

David: The switch helped me take what I learned in the entrepreneurship major that was useful, and apply it to innovation. I’m very forward thinking, so to learn more efficiently. I wanted to learn how to think like an entrepreneur and innovator, and actually use the knowledge not just to support a startup, but to actually create my own idea and move forward with it. That’s why I moved to technology, because technology is on the forefront of innovation. Being surrounded by that level of forward thinking and innovativeness drives me.

Having that environment around is the key differentiator in your approach and the way you think.

Jalen: You’ve gotten involved in a many extra-curriculars on campus. Student Association and Blackstone LaunchPad, to name a few. Why are you so involved in campus, and to how do you think these experiences have helped you develop as an innovator, leader and entrepreneur?

David: I love this school with all my heart. It may frustrate me at times, especially recently, but I love SU with all my heart, so I want to get as involved as possible. This was the first year that I took the reins in a lot of positions, but most of my love for the school came from experiences I’ve had, especially here at the Blackstone LaunchPad.

In terms of developing as an entrepreneur, two years ago, I didn’t know a quarter of the things that I know now. And that’s just from being around people who were doing it every day. The little things that you can’t learn in the classroom, I learned everyday just by being in this environment.

In terms of leadership, I’ve learned that it’s key to learn from those around me. Learn from the people who are delegating tasks and figure out how to run an efficient organization. I take all the lessons I’ve learned through these positions and apply them to my future.

Jalen: So considering how these experiences have developed you, how do you think these organizations benefit from your expertise and leadership?

David: I’m a huge people person. I love people. That is the reason why I like being in leadership positions. But it’s not all about what you know or how much you know, it’s about how you can use the information to better the team around you.

Being a good team member is not based on intelligence, but how you’re able to use information given to you. That’s what being in a leadership position has taught me over these past three to four years… you’re only as good as your weakest link.

So if you’re a leader who’s saying to your team, “we need to do this,” then you have to be willing to do it. You’ve got to have communication and you’ve got to constantly be aware of what’s going on.

I understand that my role isn’t to be the best person in that room, it’s to be the one who makes everybody else better. That’s something you learn by being in leadership roles and understanding your position. As a leader that’s just one key thing that you really need to be consistent with.

Jalen: If you could sum up everything you’ve learned in leadership with one key story.

David: When I was in high school, I was the president of the “Key Club”. It was a big volunteer organization. I took the role as president during my junior year when it was a 26-member club. Within six months it had grown to 250 members.

There was one moment where I stood up on a stage for one of our meetings, looked out and there were 250 people all waiting to hear what I had to say. When I saw that, I was like, “Wow, I can really do something. I just took this organization tenfold and they’re all looking to me to figure out the next step.”

There are so many more steps to being a leader than people understand. It’s not just be good at something. And I think that first moment looking at that audience was where I realized I’m not just doing this because I’m the best person, I’m doing it because I want everyone else in this room to do better than me. That’s where the real leadership moment kicked in. I think it’s a lesson that everybody should learn eventually.

Jalen: And does all this pressure of being a leader scare you or does it excite you?

David: It excites me. I love that. I love when people have faith in me but I also love being able to put that trust in people.

Jalen: And how would you describe your leadership style?

David: To show you the right direction, to not just be that person that’s in charge, but rather the person that wants to work with you most. That’s what matters most to me. That’s what I’ve always been a part of. I want to get to know you. I want to know what you want to do, what you’ve been doing and how we can improve yourself and this organization along with it.

Jalen: So what are three primary goals you have for your future?

David: So, number one, I want to start my own business and sell it for a profit.

I’m working on a business right now, called “Justin Case” and the goal of it is having accessories for when you need the most. Our initial product will be called “The Wingman,” which is a portable case for men that carries essential toiletries like hairspray and mouthwash — just essentials you need throughout the day.

Two is to have a nice, loving family. That’s for sure.

And three, I hope to be eventually become President of the United States. When I look out, I see the people that are making a difference in the community. I think we just need more progressive people in our country and our government. When we start talking to entrepreneurs and innovators, people who are looking ahead not just by guessing but using physical data to prove what the future will hold. We need those people who are going out, talking to the people, collecting that data and using it to make the right decisions for the country.

Jalen: So when it’s all said and done, how do you want to be remembered?

David: I want to be remembered as somebody who continually empowered other people to better themselves. I can be the best person I can be, and try to prove that every day. I can leave memoirs and autobiographies about myself, but at the end of the day, I don’t want any of that if it didn’t make another person’s life better.

If you’re not doing better than me, that means I’ve failed you. That’s the way I look at it. If I’m not making someone better than myself or at least actively trying to, then I’m being lazy and not playing my role in society.

I may end the day and be absolutely exhausted, but ultimately, I’ll lay in bed knowing that I made at least one or two people’s lives better today. That’s all I really need to get up the next day.