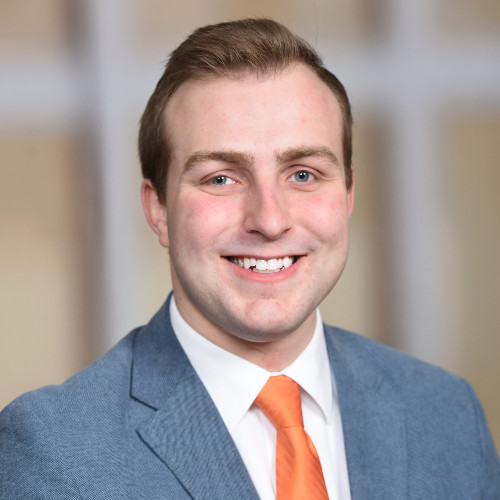 If you have ever seen a TED talk, a nonprofit organization devoted to “ideas worth spreading,” you have definitely felt inspired.  If you ever attended a TEDx event, featuring multiple speakers around a thought-provoking theme, you can only imagine all the work that goes into making for a successful and seamless production.  Meet Christopher Sekerak, a dual supply chain management and information technology major, who is executive producer of TEDxSyracuseUniversity. He is also one of the leaders of VISION, a student entrepreneurship organization based out of the Blackstone LaunchPad.

Chris is living proof that ideas are only as good as execution.  He is one part entrepreneur and one part organizational expert, demonstrating that innovation comes to life through good planning and implementation.  If you want to get something done, ask a busy person, goes the old adage.  The hallmark of a good entrepreneur is the ability to wear many hats and manage many tasks, all the while moving ahead with passion and purpose.  That’s Chris.  He is that busy person who gets it done.

Chris also knows that entrepreneurship is not a solo sport, and is an expert at team building.  He quickly grew the TEDxSyracuseUniversity team to more than 20 people, working closely with Ashley Steinberg, a public relations major, and marketing and information management and technology minor.  Equally impressive, Christopher and Ashley are only sophomores who first became involved with TEDxSyracuseUniversity as freshmen.

TED grants licenses to independently organized TED-like events as part of the TEDx Program.  “When TED started the TEDx program, x stood for independently organized. In time, it has come to stand for so much more. For multiplying ideas, getting into action and connecting a global community. A pulse or a heartbeat of ideas around the globe,” said one of the original organizers.  The TEDx program enables organizations and communities to host local, independent TED-like events, and to date, more than 13,000 TEDx events have been held in 150 countries.  “A TEDx Talk is a showcase for speakers presenting great, well-formed ideas in under 18 minutes,” according to the TEDx website.

TEDx talks typically fall into one of seven categories:  the big idea; the tech demo; the performance; the “dazzle with wonder” about science and discovery; the small idea, a very engaging take on an interesting topic; or the “issue” talk.  Putting them all together in one TEDx event is a lot like putting the pieces of a puzzle in place to create a coherent picture.

This year’s event is set for April 21 in Slocum Hall.  The event will include a program with speakers who share their narratives and insights on a theme selected by TED.  Their team is currently in the process of finalizing their speaker lineup, which will be announced President’s Day week.

Serving as co-lead organizer and executive producer, Christopher helped lead a reorganization of TEDxSyracuseUniversity after many members graduated this past May. Starting with only four team members at the beginning of this school year, the group has grown to a dedicated force of 21 team members.  Ashley, who serves as communications, editorial, and marketing director, has devised a multimedia outreach plan to engage audiences and potential speakers. The group is also pursuing being able to increase the number of attendees that their TED license allots, so they can continue to grow the audience.

Outside of TED, TEDxSyracuseUniversity receives support from sponsors such as the Ruth Ivor Foundation, Inc., the Syracuse University School of Information Studies, and the Blackstone LaunchPad.

Watch for the announcement of this year’s lineup of TEDxSyracuseUniversity speakers this month through an exciting social media campaign coming soon.  Event ticket information will also be available this month.