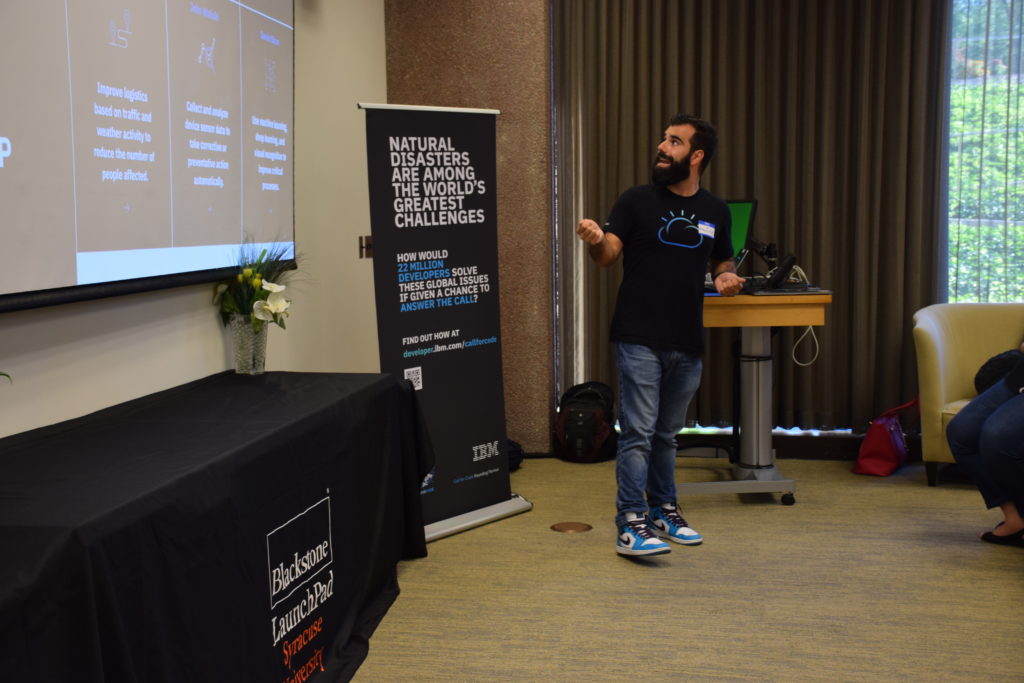 As Hurricane Florence was bearing down on the east coast headed to densely populated centers along the Carolinas, and Typhoon Mangkhut was slamming the Philippines headed to Hong Kong, more than 100 Syracuse student hackers were huddled together in Bird Library and the Blackstone LaunchPad to brainstorm solutions.

Each day natural disasters directly impact 80,000 people, costing the global economy more than $270 million. This past weekend, as part of a global Call for Code initiative, software developers from IBM, and faculty and industry judges listened to ideas generated by teams of SU students over a massive two-day hackathon about how to use most effectively AI, Blockchain, Cloud, Data and IoT technologies to improve communities’ disaster preparedness and resiliency.

The event was hosted by The Blackstone LaunchPad at Bird Library, SU’s Office of Corporate and Foundation Relations and Syracuse University in partnership with IBM, David Clark Cause, United Nations Human Rights, The Linux Foundation and The American Red Cross.

All Call for Code participants will have until September 28 to refine their codebase and submit a final Git Repo and three-minute pitch video to the Call for Code site.  All submissions from across the world will be reviewed by IBM and partner judges, and winners will be announced Oct. 29 during a live-streamed all-star concert and award event at the Regency Ballroom in San Francisco. The first-place winner in the global competition will receive $200,000; second and third place will receive $25,000; and fourth and fifth place will receive $10,000.

Syracuse University winning teams received $42,000 in IBM Cloud credits, along with a prize package of tech gadgets donated by SU Libraries.  The winners are:

Description:  Donation relief funds plays a vital role in bringing life of the victims back on track. However, there have been scams in the donation relief funds where the collected funds were tampered. The idea is to host the donation relief funds on  the  blockchain  platform  where  the  Blockchain  nodes  can  be  hosted  on  Kubernetes  cluster  for  distributed computing. The idea includes IoT Seismic Tracking and prediction of disastrous events on the basis of the data generated (ML), and transfer of disaster relief funds using the Blockchain platform.  Participants including profit and not-for-profit organizations would be able to host themselves on the platform and transfer funds without any tampering.

Description:  The project aims to quickly restore Internet to unconnected disaster areas, using  a client-server model. The client is an iOS application and the server is a python program, with an iOS application that will read users’ GPS coordinates and send the coordinates to the server every 5 minutes. The server will compare the current coordinates with last updated coordinates of an area and calculate the percentage of the active users. If the percentage is lower than threshold, Blink will know this area is experiencing internet inconnectivity.  Internet-beaming drones will then be sent to the affected area.

Description:  Living in Syracuse, the team realizes that the region experiences severe snow storms that present hazardous driving conditions. Many car accident cases are caused by whiteout conditions that make it hard to find lines in the road. The team proposed to study  road-line detection using machine learning captured data through a dash-camera.  The machine learning technology will capture data on a sunny day, and store the location, direction and captured data to the database. This information will be used to predict road lines on snowy days and alert a driver if the car is off course.

The event drew diverse representation from across campus, with participants from the iSchool, College of Engineering and Computer Science, VPA School of Design, Arts and Sciences, Newhouse, Whitman and Falk.