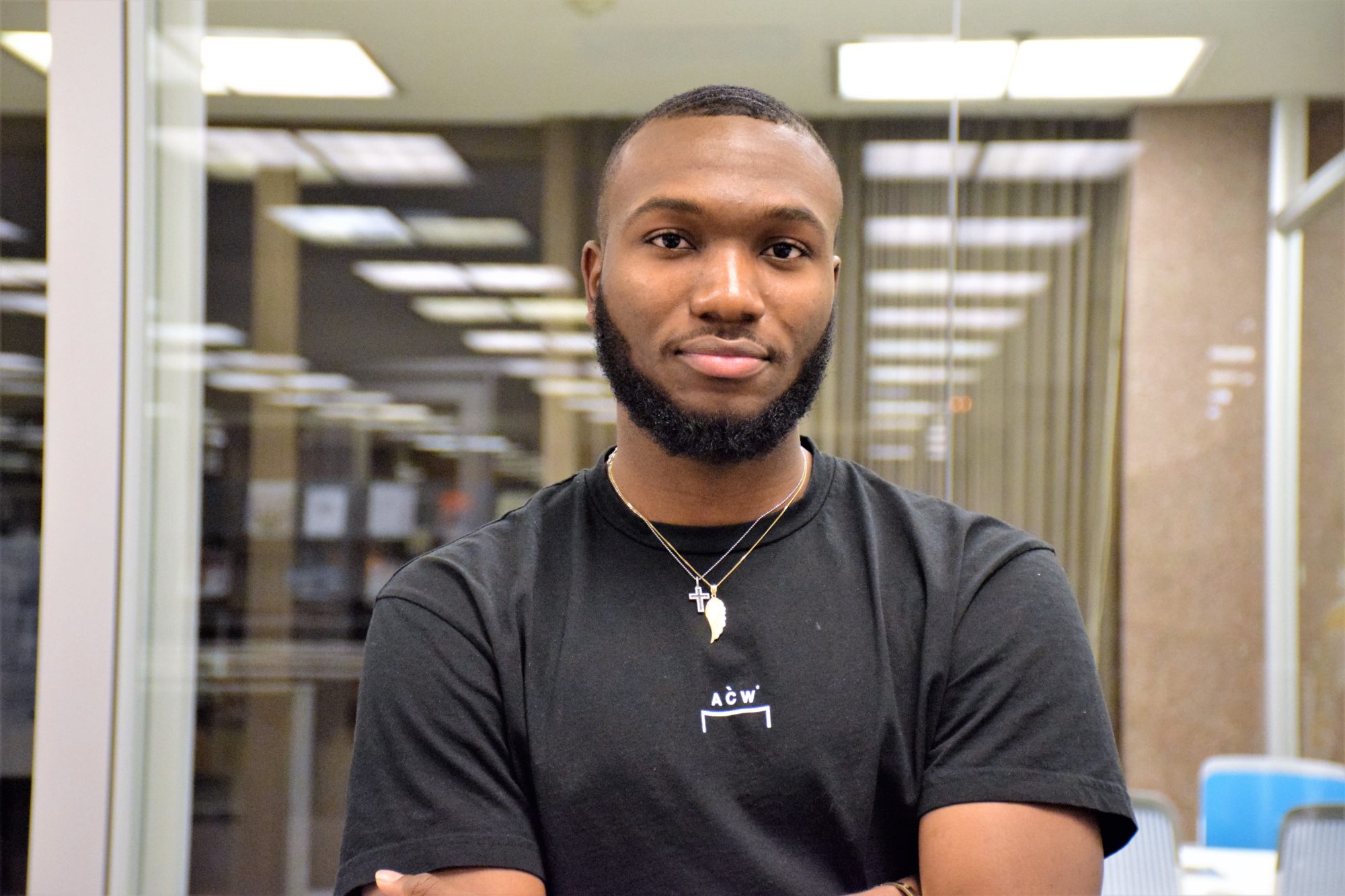 Caleb Obiagwu, a junior engineering and computer science major, is a dreamer. His start-up company, SYRE Tech LLC, is built to revolutionize the way we receive content by developing looking glass, an innovative window technology that serves as a digital display.

Born in Lagos, Nigeria and raised in London, England, Obiagwu grew up in an environment he described as “civilized and refined.” Attending a boarding school, King Edwards Whitley, from an early age, he was encouraged to follow the status quo, work as a part of the system and value comfort over his ambitions. Despite valuable experiences during those years- attending a Harvard leadership program, the Global Young Leaders Conference and serving as class captain for his high school- he often felt limited and yearned for something more.

Reflecting on his early environment, Obiagwu recalls, “If you want to be an out of the box thinker, I don’t feel you should ever stay in England. They normalize everything and nobody forces themselves to dream bigger.” While he looked for friends to support his early dreams, they were hard to come by. Confined by this culture, a dreamer like himself felt trapped. He slowly felt himself buying into the very culture of conformity he despised.

Caleb saw the college admissions process as an opportunity to break away. While he could have attended a prestigious university in England, Obiagwu fell in love with what many call ‘the American dream.’ From nearly 3,500 miles away, he saw America as a land of opportunity, a culture that valued innovation and a home to risk-takers. Placing this fresh perspective at a higher value than strict academia, he “wanted to pay for the experience of thinking outside of the box.” And while it didn’t come without resistance, this vision drove him to convince his parents to enroll him at Syracuse University.

Obiagwu began his studies in the fall of 2016. Coming in as an engineering and computer science major, his plan was to get good grades, graduate, get a job and then start a successful company. But as he puts it, “Life happens when you’re busy making other plans.” Sitting in an introductory chemistry class with partner and fellow SU student, Zachariah Reid, the two came face-to-face with a question many young dreamers ask themselves, “Why are we doing this if we’re not passionate about it?”

Coming such a long way to reach this point, Obiagwu resisted the prospect of living a life that followed the status quo. In that chemistry class the two decided to follow their passions to start something different.  But what would it be?

The answer came to Caleb in a dream. While in a deep sleep, he was met with a vision of a transparent display interface used to show content and information — something futuristic like in the latest sci-fi movie.

Now with a spark, ignited in chemistry class and confirmed by his dream, Caleb had a clear vision for the technology he wanted to develop, one that “encompasses all the original technology of a window, while also including more innovative features to provide additional privacy and be used for entertainment purposes.”

Inspired by this grand vision, at first, Obiagwu approached his dream selfishly. He wanted to build the idea by himself, until his father gave him advice that would completely shift his approach. “He told me that a bit of something is more than all of nothing.” From this, he realized that in order to achieve this vision, he first needed to assemble a team.

The first member of this team was Zachariah Reid (pictured above with Caleb). In addition to believing in the vision, he brought his business savvy and organization skills to the table. After him, came another SU student, Nazim Ahmed, who contributed with his technical and mechanical skills. Finally came Ernst Beliard, who added to the group with knowledge of computer and digital technologies. Its core team now in-tact, SYRE Tech (standing for “something you rarely expect”) was officially founded on March 16, 2018.

Since its founding date, SYRE Tech has been its development phase. Its founders dedicate their time, energy and capital into obtaining patents, negotiating deals with lawyers, identifying specific demographics and further developing the glass display technology. Working on this company for nearly two years, Obiagwu has taken each experience as a learning opportunity, saying, “I started listening more to understand than to reply.” Through this strategy, Caleb has grown tremendously, picking up on tactics and strategies he didn’t know before.

With its initial investments already in place, over the next five years, SYRE Tech wishes to expand brand awareness, develop its technology and optimize operations. “Transparent glass is real estate,” says Obiagwu. In the short term, the company aims to utilize the real estate on SU Centro buses, currently occupied by paper or vinyl advertisements, and replace them with their own technology. With a beautiful display, this would allow commuters to see the funniest memes, latest breaking news and exciting sports highlights, as a regular part of their daily commute.

As a long-term goal, Obiagwu hopes that the development of SYRE Tech’s looking glass display technology coincides with the growth of the self-driving vehicle industry. The company aims to have its product inside of the automated vehicles of the future, creating a relationship between entertainment and transportation that has yet to be developed.

Obiagwu’s story of self-discovery, following his dreams and beginning SYRE Tech, is relatable to many successful entrepreneurs and should serve as an example for all dreamers. More important than great resources, abundant capital, a strong network or technical know-how, was the strength of his dream, the clarity of his vision and the work ethic to manifest it.

The same dream that compelled him to leave his home in England, to attend a university over 3,000 miles away, is the dream that built SYRE Tech and will continue to power it in the future. Approaching his dream with belief and intention, Caleb Obiagwu has established himself as an entrepreneur, and created a company which will make an impact on people’s lives for years to come. Look out for SYRE Tech technologies in the buses, cars and homes of the future.