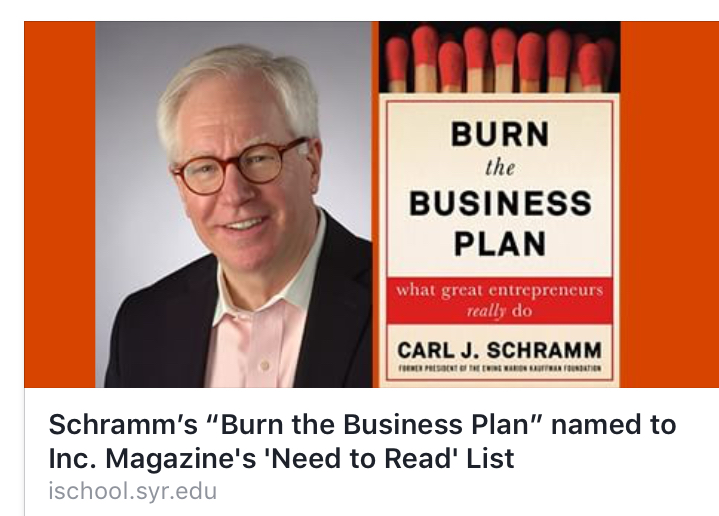 A new book released this week by University Professor Carl Schramm has been named to Inc. Magazine’s “Need to Read” list for 2018.

In Burn the Business Plan: What Great Entrepreneurs Really Do, published by Simon & Schuster, Schramm explores the backgrounds of successful entrepreneurs across a variety of fields, illustrating how their passion, determination, and willingness to innovate can often be more important than formal financial skills, like building a traditional business plan.

Many successful businesses today were launched without creating a formal business plan, Schramm notes in the book, as it’s more important for entrepreneurs to be flexible and nimble. “Business is simply too fluid; unpredictable markets set the direction of companies for established giants and small startups alike, not the other way around,” he writes. “Entrepreneurs must learn to dance to the market’s ever-changing tempo and rhythm.”

Schramm points out that Microsoft, Apple, Facebook, and Google are just a few examples of companies that began without writing a formal business plan.

And despite many of the young faces in leadership positions at today’s startups, Schramm’s text works to disprove a widespread belief that most successful entrepreneurs are young Silicon Valley software prodigies. The average entrepreneur, Schramm says, is in their late 30s, and has spent about a decade working in corporate America.

It is this formal corporate work experience, Schramm argues, that provides these entrepreneurs with distinct advantages, including important contacts in the business world who could be customers or users for their new service or product, and an opportunity to strategize with knowledgeable colleagues for valuable business advice.

“Readers will find most of [Schramm’s] cases gratifyingly unfamiliar and generally relatable,” Inc. Magazine’s review suggests. “Burn is a solid roundup of the current best thinking on startups, guiding new entrepreneurs in both introspection and execution.”

Once dubbed the “evangelist of entrepreneurship” by The Economist, Schramm was appointed University Professor at the School of Information Studies (iSchool) in 2012 after serving for nearly a decade as president of the Ewing Marion Kauffman Foundation, the world’s premier organization dedicated to encouraging entrepreneurship and understanding the role innovation and new firm formation play in economic growth.

An author’s talk and book signing for Burn the Business Plan is planned for February, sponsored by the Blackstone LaunchPad at Syracuse University and the Syracuse University Libraries. Details about the event will be made available in the coming weeks.  The book is also part of the LaunchPad’s Innovation and Entrepreneurship reading collection, located in Bird Library.  It is available for purchase in the SU Bookstore, as well as on-line.