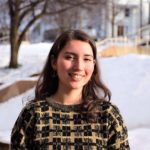 Bridget McDonough 19’, an aerospace engineering student at the College of Engineering and Computer Science, has been named a Blackstone LaunchPad Global Media Fellow where she’ll have the opportunity to meet some of the most innovative minds on the Syracuse University campus and share their stories.

McDonough, a Southern California native, was originally going to study journalism at the S.I Newhouse School of Public Communication. She always had a deep passion for space though, her inspiration stemming from looking up at the night sky and the far too many sci-fi movies she had watched growing.  She knew she wanted to work in the space industry after college and she figured the most direct way to do so was by studying a major with the actual word “space” in it: aerospace engineering.

“I had never talked to an engineer or a scientist before deciding to pursue this major so it was a daunting idea to think that I would be doing something completely out of my comfort zone”, she says as she recalls the day she decided to transfer out of Newhouse. This May she will be receiving her degree and she can’t help but smile at the idea of it, a gleam of pride crossing her eyes. When asked about reflecting on her past few years, Bridget comments, “I’m honestly so proud of how far I’ve come. I went into a major where the only thing I knew to expect was a lot of hard work and determination. My eighteen-year-old self wasn’t even sure if I was capable of making it this far, so I think receiving this degree will be a very emotional event for me because I’ll be proving to myself that, yes, I can do whatever I set my mind to.”

She was drawn to working at the Blackstone LaunchPad because it not only allows her to make time for writing, a hobby she has always enjoyed, but also because Blackstone LaunchPad directly exposes her to some of her interests in technology, innovation, and entrepreneurship. She says she is not only excited about learning “… about some of the most innovative start-ups happening right here on campus…”, but also about hearing “… the back story of the innovators—where they come from, where their inspiration comes from, and how they’ve gotten to the point where they are now.”

She also thinks Blackstone LaunchPad will give her the right environment to prepare her for upcoming summer internship with the space-startup, financial service company, Space Angels. Bridget will be interning in New York City as part of the 3rd class of Brooke Owens Fellows. The Brooke Owens Fellowship is a fellowship that pairs exceptional undergraduate women interested in the aerospace industry with executive mentorship, ranging from company CEOs to astronauts, an internship, and a strong alumni network in the aerospace industry. “I still can’t believe I was chosen as Brooke Owens Fellow and I am beyond excited and blessed to be a part of it. Not only is it a great learning opportunity, but I love the commitment all the people who make this fellowship possible, have for women representation in the aerospace industry, an industry that has been traditionally very male dominated.”

Bridget is driven to expanding the accessibility to space, making it a place for people from all backgrounds and hopes to be able to shape the way the space industry develops. “I think space holds so many opportunities for ventures because it’s so new and has a clean-slate. The only boundary I can see in the space industry is the lack of imagination for what it could be.” When asked about where we can find her in the ten years from now, a smile breaks her façade and she says, “Mars.”