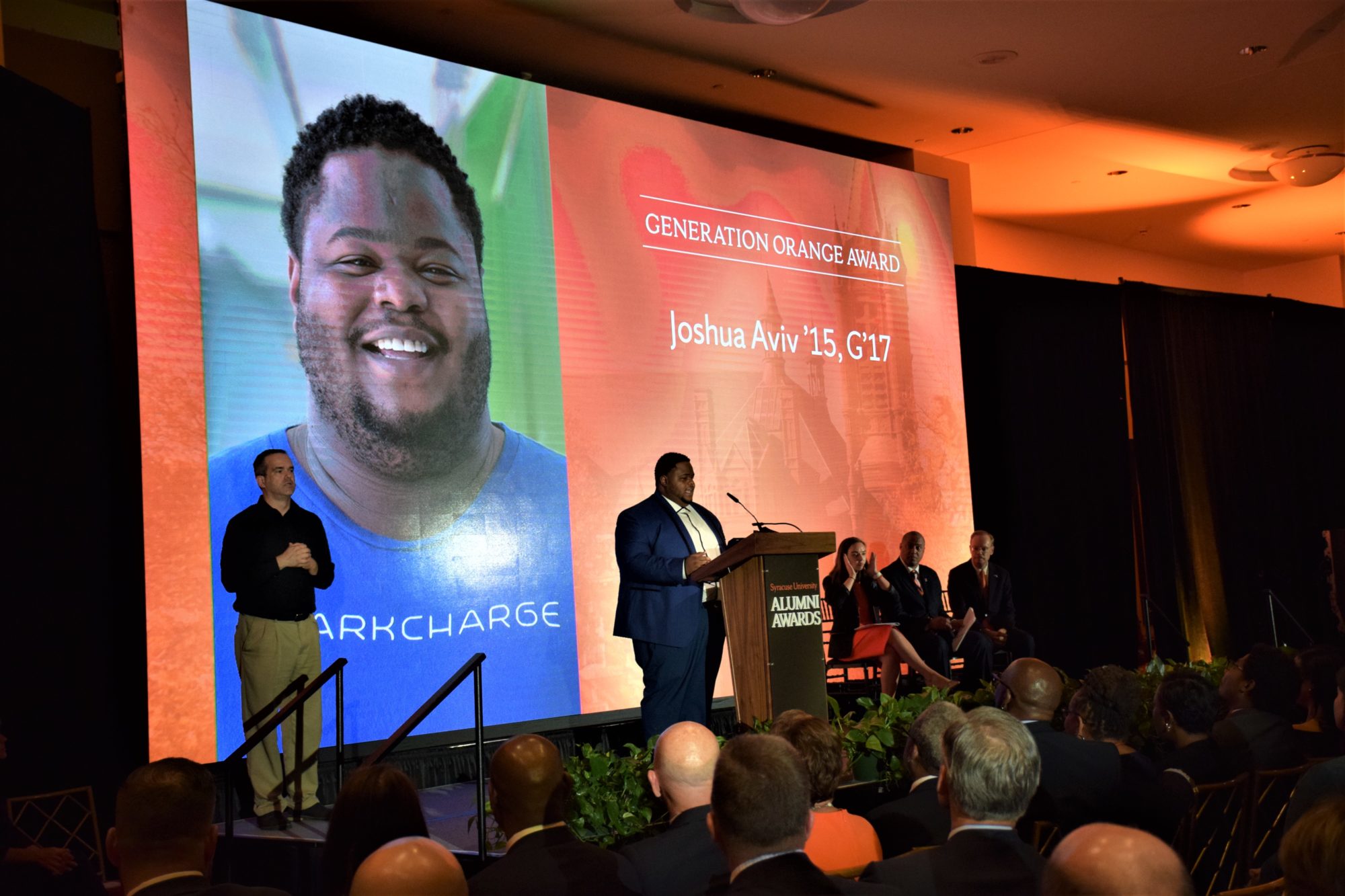 LaunchPad alumnus Josh Aviv ’15, G’17, founder and CEO of SparkCharge, was honored with the Generation Orange Award at this past weekend’s Orange Central.  “Without the LaunchPad, there would be no SparkCharge, and that’s simply the way it is,” said Aviv when he accepted the award on stage at the Oncenter Convention Center.

Introduced in fall 2013, the Generation Orange Award recognizes Generation Orange alumni who have made an impact on campus and in their communities through their volunteer work and philanthropy on behalf of Syracuse University. The award is conferred at the signature event during Orange Central weekend.

Aviv launched SparkCharge as a Syracuse University student working at the Blackstone LaunchPad powered by Techstars and has gone on to become a dynamic figure in the clean-tech community. SparkCharge makes portable, ultrafast charging units for electric vehicles, and has been featured in major technology and clean energy publications. 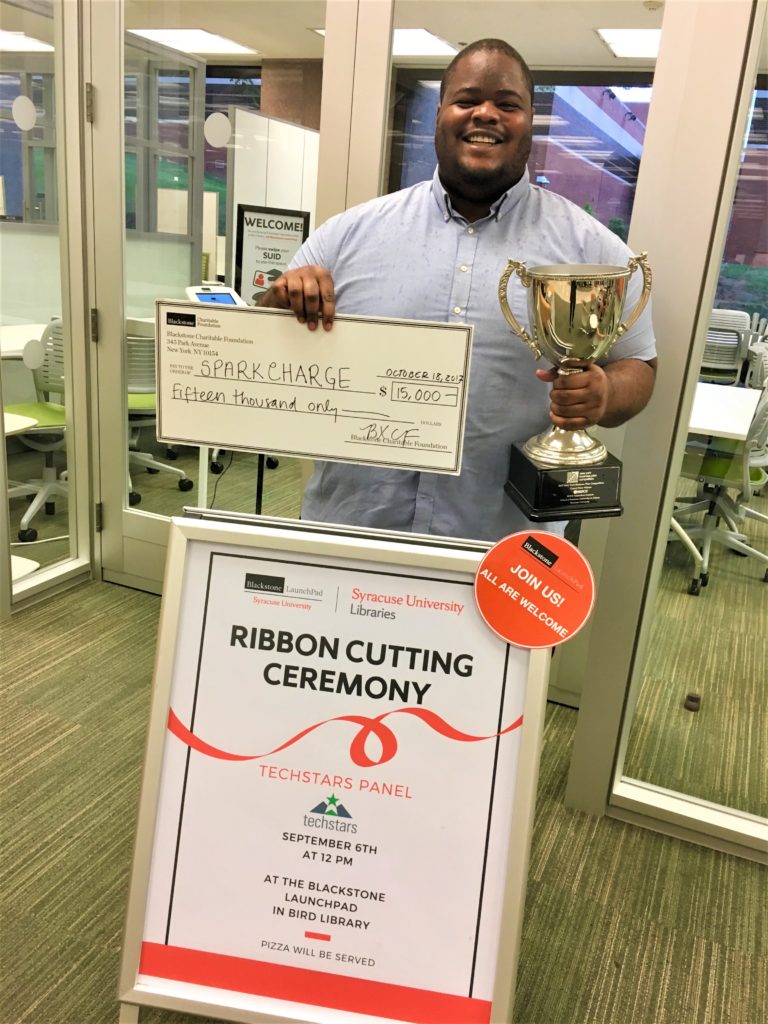 As a student, Aviv won the grand prize in the New York Business Plan Competition, as well as top honors in more than seven business competitions while earning his degrees from Syracuse University. He worked closely with the LaunchPad on his product and business roadmap, and  incubated his company after graduation at the Syracuse Center of Excellence (CoE) where he built his first initial prototype.

He won the top prize of $1 million at 43North, a Buffalo-based startup competition, receiving his trophy from New York Lt. Gov. Kathy Hochul ’80 at the 43North awards ceremony. He was also the recipient of a NYS FuzeHub Commercialization Competition award. He has won the California Climate Cup, Startup Fest’s global pitch competition, and Plug and Play’s clean energy innovation award. TechCrunch most recently named Spark Charge as a top tech disruptor.

After graduating from the Syracuse LaunchPad, and winning the first ever Blackstone Launch Pad – Techstars Training Camp global pitch competition, he was selected for the prestigious Techstars accelerator program in Boston.  SparkCharge was then accepted into a residency at 43North in Buffalo where the company is starting manufacturing operations. The company has an engineering division based at Greentown Labs in Somerville, Massachusetts, a Boston-based facility that is the world’s largest clean-tech incubator. SparkCharge also has a residency at the Plug and Play Tech Center, a renowned industry-focused accelerator program in Silicon Valley.

Working with Syracuse University’s innovation ecosystem and with industry and economic development partners, SparkCharge launched its first charging unit at a June 2019 Demo Day at Greentown Labs, attended by government and industry leaders, and investors.  He has just closed on several millions of dollars in funding.

Before and after the awards ceremony, Aviv was back to work at the LaunchPad, giving Fireside Chats, meeting and mentoring students on their startups, and holding office hours all day Sunday in the LaunchPad at his old desk. Additionally, he spoke at events at the Maxwell School, the iSchool, and at the Office of Multicultural Advancement.

He recently established a clean energy prize through the LaunchPad and SU Libraries for a student team launching an innovation that tackles sustainability and climate change through a clean energy solution.

Aviv joins Todd B. Rubin ’04 as a Generation Orange recipient.  Rubin received the honor in 2014, shortly after the award was established.  He established a grant through his family’s foundation, The Rubin Family Foundation, to create The Rubin Family Innovation Mentors program for the 2019 – 2020 academic year at the Blackstone LaunchPad powered by Techstars at SU Libraries. Five student LaunchPad entrepreneurs were selected this year, and are actively working with emerging student startups.

After graduating from Syracuse University’s School of Architecture, Rubin started his career as a junior designer in the New York City office of Gensler, the global architecture and design firm, where he focused primarily on retail design.  Today, Rubin is The Minister of Evolution and President of The Republic of Tea, a family-owned and operated company.  He has utilized his background in architecture throughout the Republic of Tea brand by overseeing the design of the company’s shipping center, as well as its headquarters, located in Novato’s Hamilton Landing.
.