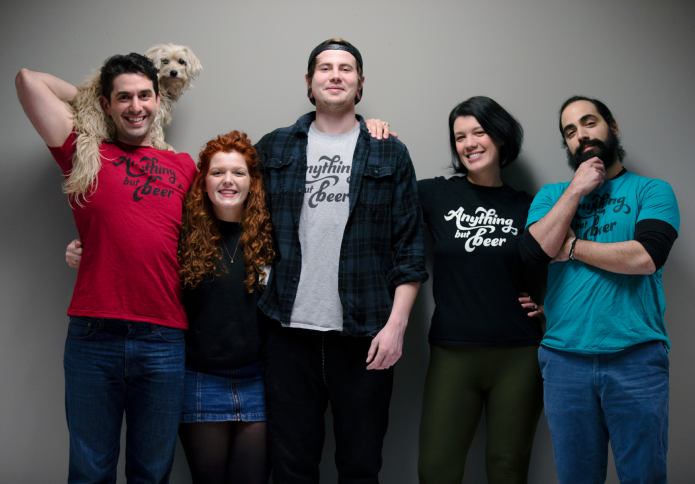 SU alumni entrepreneurs Logan Bonney and Brittany Berry, co-founders of Anything But Beer, announced plans this week to open a taproom in downtown Syracuse neighborhood of Hanover Square in the early summer of 2019.  The SU student startup, which quickly developed a loyal following across upstate, is expanding its brewery to make room for more flavors, and expand its production to serve Buffalo, Albany and New York City.  And, it will also open its very own tap room, with an inclusive beverage menu (offering a variety of craft beers and spirits, as well as craft non-alcoholic beverages), and a locally sourced  food menu with gluten free, vegan, paleo options and more.

You can be help make this happen.  Anything But Beer has just opened its crowdfunding page to support this expansion.  Visit https://igg.me/at/anythingbutbeer/x/17421866  to learn more and help support the expansion, which will be a lively addition to downtown.

Anything But Beer produces gluten free craft brews for for people who dislike the taste of traditional beers or have dietary restrictions.  Its products are at the crossroads of ciders, wines, and beers.  The company runs a completely grain free brewery, producing naturally gluten free products with local fruits and vegetables. Some of its most popular are Son of James (Oak Aged Irish Whiskey Apple), Wild Thang (Wild Fermented Cider), and Bay of Bengal (Blueberry Cardamom). Anything But Beer products can be found on draft and in bottles throughout the Central New York region.

Bonney, has been brewing for seven years, creating fruit wines and meads based on ancient recipes, which he learned while a member of a Renaissance festival organization. He has degrees in mechanical technology and business administration, as well as a recent master’s degree in entrepreneurship and emerging enterprises from the Whitman School of Management at Syracuse University. He served in the Air National Guard for eight years, while simultaneously starting his first business, a rental property company in Syracuse, NY, which has been growing steadily for seven years. He brings that experience and growing enthusiasm for business and brewing to Anything But Beer.

Berry has a bachelor’s degree in industrial and interaction design from Syracuse University’s College of Visual and Performing Arts. She focused her training on user research, strategy, and experience design. Additionally, she has work experience in sales management, operations management, and design consultation. She is passionate about using her varied skill set to build something that positively impacts the industry and the community.