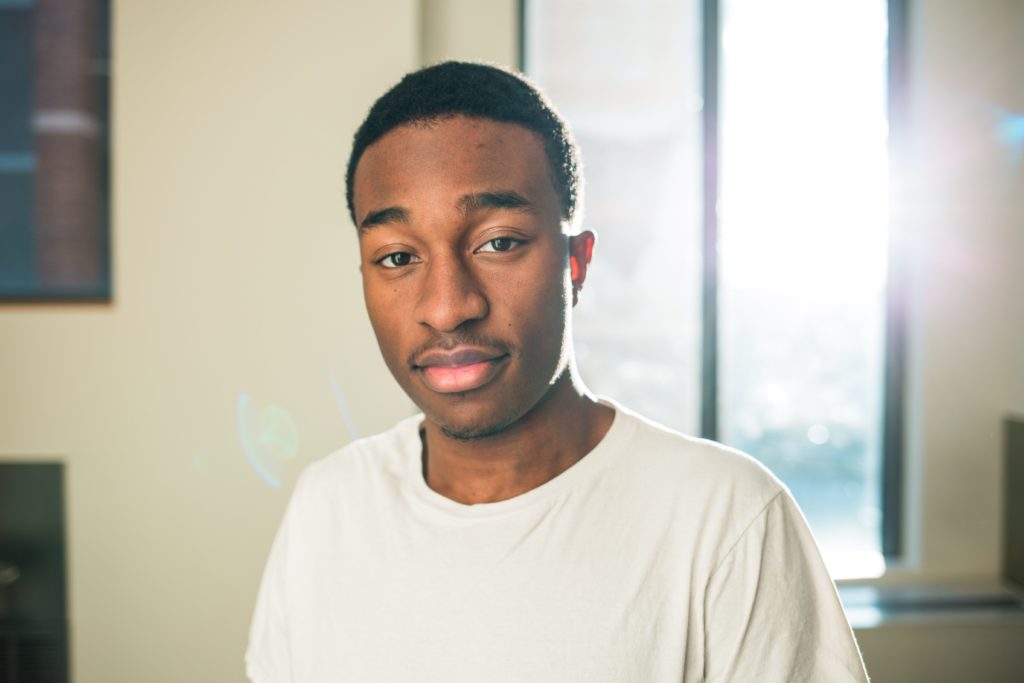 Anthony Obas has always aspired to make a difference. Growing up in Harlem, New York, he was deeply invested in his community  throughout his childhood. Involved in sports teams and other local involvements, his confidence was a by-product of solid relationships, community involvement and a supportive family. Empowered by his environment, he was admittedly, “a very confident kid.” The positivity of his environment was affirming, encouraging him to keep his ambitions and goals limitless.

Coming from a supportive environment, his transition to the all-boys and Catholic, Xavier High School, was difficult. Contrasted with how he was raised, the new environment wasn’t as supportive. He initially struggled to connect with his classmates and began to feel discouraged.

Searching for ways to combat these negative feelings, Obas gravitated towards athletics and other leadership positions, becoming a key player on Xavier’s track and football teams and winning multiple awards for his service and advocacy. As a member of these teams, he found a stable social group that was supportive, reminiscent of how he was brought up. With this sense of community, he began to flourish. Positively, reflecting on these experiences, he reminisces, “they got my mind right and my body right.”

Heading into the college admissions process, Anthony wished to put himself in a place where he could find community, pursue his ambitions and expand his network. He chose Syracuse University, a school which would give him the opportunities, teachings and access he needed.

Developing skills in television and radio, blogging and event planning, Anthony has spent his time developing a wide knowledge base to inform his future decisions.

He began working with the on-campus radio station, WERW as a freshman. Here he excelled, both in his social media coordinator position, as well as within his own radio show. Obas reflects on his time at the station, saying, “WERW gave me the space to be creative. It gave me the creative room to work and explore.”

During his sophomore year, he served as the Director of Operations for a label called Voiceless Music. While simultaneously handling company finances, he popularized a blog on the labels’ website. Producing high-quality content on a regular basis, he learned how to connect with an audience through written word and how to use them as tools to achieve his goals.

By hosting events like the Voiceless Music Meetup, This is Upstate, and multiple others on campus, this year, Obas has created spaces for creatives and entrepreneurs to network with each other and exchange ideas. The confidence he has formed through these experiences allow him to a sense of preparedness for any new situation. His preparation enables him to excel.

His brand has recently gained notoriety throughout upstate New York and New York City, through his exciting events and entertaining #ObasRants. His well-attended events, charming personality and growing social media presence have helped his personal brand continue to grow. As his impact grows, so does he, saying, “I can’t separate my business and my personal because it goes hand in hand.”

He is currently traveling abroad in London. Studying abroad will give Obas the opportunity of a lifetime, allowing him to excel both academically and professionally. Splitting time between classes and an internship at Sony Entertainment, He wishes to use his time in London to start the development of his international network. He wishes to do this by building on his skills, continuing to plan events, helping artists and occasionally writing.

His biggest lesson learned from is to always remain positive. “One thing my brand is so strong about is making sure I’m positive all the time,” he said, “at times I felt like I was losing that identity by making a few mistakes, but I’m more focused now and more mature now.”

This year will be a culmination of each of these lessons. He will translate this knowledge and momentum in his new business venture called Guided by Obas, which is an independent consulting agency, looking to “take artists and brands that are good and make them better.” Built on principles of personal and brand growth, Obas predicts this agency will be different, “emphasizing collaboration, and working with others, instead of working for them,” a value he has gravitated towards, his whole life.

With plans to officially drop in late-spring, this journey will be the culmination of each of his lessons learned.

Each step of Anthony Obas’ life has been intentional. By consciously learning from each of his experiences, he chases the prospects of limitless potential. Driven by his confidence, work ethic and community, he will continue to progress as an entrepreneur, and in all aspects of life.