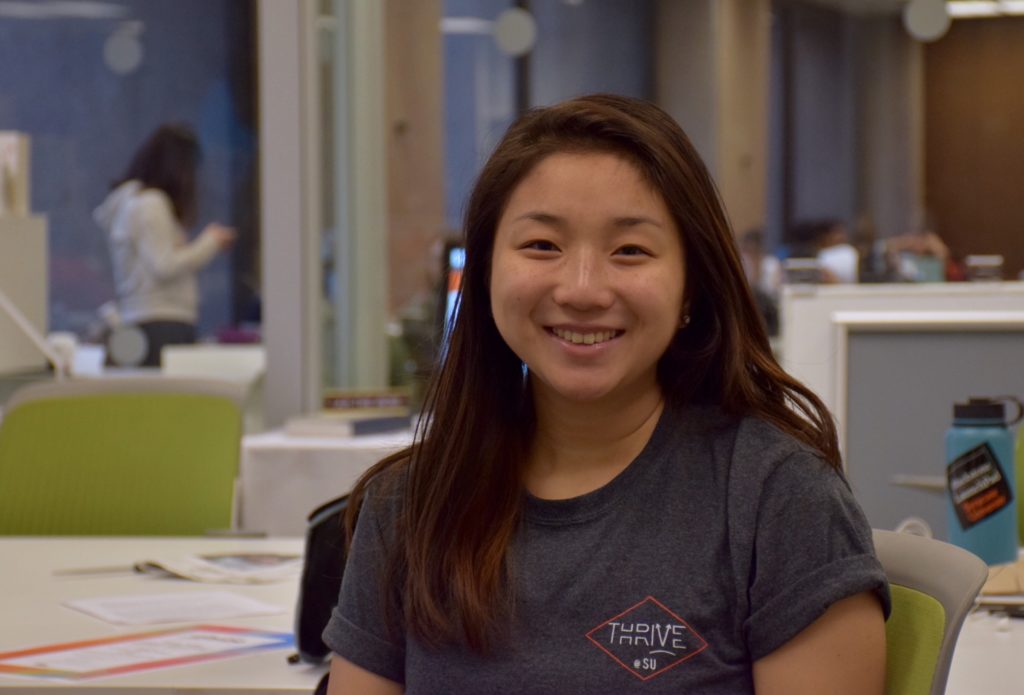 If you ask Amanda Chou where she is from, you’ll get a complicated answer. Her roots range from Beijing, to Seattle, Taipei, and most recently, Syracuse. With her life so widespread, Amanda is quite passionate about communications. Amanda, plans to graduate in December of 2018 while double majoring in Public Relations in S. I. Newhouse School of Public Communications and Political Science in The Maxwell School of Citizenship and Public Affairs.

Amanda calls herself an aspiring communications professional who wants to work in the nonprofit world. Her specific interest is in advocacy campaigns, and she wants to shine a light on current events and important issues. Particularly, she thinks non-profit communication needs a “fresh new approach” – one that she can bring that approach because community engagement is an important issue to her. “With the current political climate it’s really important to get involved. As students, it’s critical that we use our skill sets to make a difference in our community.”

Amanda began her civic journey at SU in 2016 as a content creator for Thrive Projects, a Blackstone LaunchPad grown nonprofit organization. At the time, she was also one of the first Blackstone Global Media Fellows at the LaunchPad in Bird Library. Thrive Projects’ mission of community sustainability was specifically important to Amanda as the organization worked abroad. Amanda was so good at her job that she soon took on the role of Chief Marketing Officer of Thrive Projects. She was an important strategist for the team, and helped craft messaging that helped the team win numerous campus business plan competitions, as well as first prize in the New York State Business Plan Competition in the social entrepreneurship category.  She was part of the team that won the campus Hult Prize competition, and went on to the global regionals in Boston.  She was also invited to participate in the Clinton Global Initiative University (CGI U) in Boston.

With the team, she traveled to Nepal and participated in the on-the-ground sustainability and empowerment educational workshops created by Thrive Projects, and its subsidiary, Thrive Nepal. She produced videos, blogs and news articles that chronicled the challenges and celebrated the achievements of the many incredible people she met in Nepal who were touched by Thrive.

Amanda keenly understand the importance of the Thrive mission, which is why in Spring 2017 she, along with several other students, co-founded Thrive at SU. Thrive at SU is a student organization that works to bridge the gap between the Syracuse University campus with the greater Syracuse community by working alongside local nonprofits. She has quickly grown the official SU student organization, to a large collaborative of civic entrepreneurs and volunteers who meet each Friday afternoon in the LaunchPad, to discuss ways to engage with the community.  Last year they held the inaugural #ThriveTogether cultural fair, which raised $1,500 for a local nonprofit, InterFaith Works of Central New York.

This year they are again engaging with InterFaith Works and its Center for New Americans. Which provides resettlement and post-resettlement services, helping refugee families successfully establish their lives in the states. The program typically resettles 500-600 new refugees in Central New York each year.

Amanda’s diverse background makes her especially sympathetic to New Americans. She came back to the United States for school after living abroad for 16 years. “New environments are scary. I can’t imagine what it must be like to pick up your life and have to start completely over.” Through her experiences living abroad and her travels, she’s learned that vulnerable communities need to share their stories– they need a voice.

The Thrive Together Fair, put together by Amanda and the Thrive at SU team, aims to raise the volume of that voice. The fair will not only showcase a variety of student organizations but will also include an array of cultural performances and food.  All of the proceeds will go directly to InterFaith Works.

The fair is March 3, from 11am-2pm in Goldstein Auditorium, and tickets are available at Schine Box Office or Online. Community members and Syracuse University students, faculty, staff and alumni are welcome.

Amanda embraces the term “community builder.” In the fall, she will be leaving her position as president of Thrive at SU as she heads off to her final semester in New York City. But Amanda plans to continue her work with communities in need.  Wherever her path leads, Amanda will continue to be a voice for those in need.