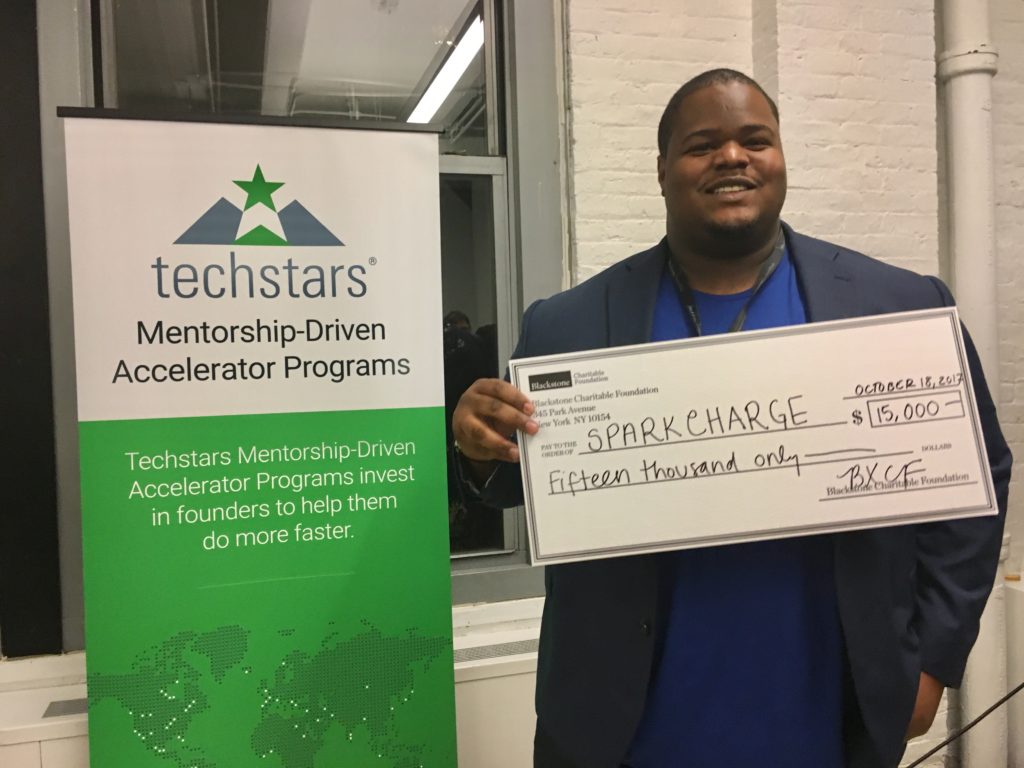 The competition came at the conclusion of a two-day Blackstone/Techstars Training Camp, an innovative new program for collegiate entrepreneurs that featured a keynote on October 16 by Stephen A. Schwarzman, chairman, CEO, and co-founder of Blackstone. Schwarzman is an active philanthropist with a history of supporting education and entrepreneurship. This intensive boot camp brought together program staff and the 40 top performing teams from the 20 Blackstone LaunchPads across the U.S. and Ireland for workshops with experts and mentors from Techstars and the Blackstone Group.

Josh Aviv, co-founder and CEO of SparkCharge, and Angelo “AJ” Damiano, founder of PowerSpike, were the two Syracuse University student entrepreneurs selected to attend the two days of workshops and mentoring. David Seaman, dean of libraries, Linda Hartsock (executive director) and Braden Croy (program manager) of the Syracuse University Blackstone LaunchPad were actively involved in the event and were joined by SU alumni based in New York City for the final pitch competition.

Seven finalist companies were selected by Blackstone and Techstars experts to participate in the culminating pitchfest, where each presenter had three minutes to describe their services and business plans, followed by two minutes of questions from the judges.  The winners were selected by audience vote, which included Blackstone LaunchPad teams and staff, Techstar founders and program managers, Blackstone Group mentors and investors, and invited guests from the 20 Blackstone LaunchPad campuses.

Syracuse University’s Aviv won the $15,000 grand prize for SparkCharge’s ultrafast, portable charging stations for electric vehicles that fit in the trunk of a car. He also won an expenses paid trip to Techstars Foundercon in Oakland, CA in October.  Second prize went to ApisProtect of University College Cork, Ireland, and third prize to Zorin OS of Trinity College, Dublin.

“The student entrepreneurs who participated in the Blackstone LaunchPad Techstars Training Camp are inspiring,” said David Cohen, founder and co-CEO of Techstars. “It’s great to see the incredible learning that took place during the two days. These young adults are pursuing entrepreneurship as a life choice – an opportunity that wasn’t available when I was their age. We at Techstars are proud to join forces with Blackstone LaunchPad to support student entrepreneurs from across the globe.”

“Over the course of the Blackstone LaunchPad Techstars Training Camp, I had the opportunity to meet with ventures from over twenty Universities, hear their pitches, and get to know the entrepreneurs.  I was incredibly impressed by these student ventures – the diversity of ideas, the commitment to entrepreneurship, and the potential for scalable impact, was exceptional,” said Amy Stursberg, Executive Director of the Blackstone Charitable Foundation. “A special congratulations to our demo day winner, SparkCharge from Syracuse University. Through the work of Blackstone LaunchPad on campuses, we are proud to be a part of these ventures’ development and continued growth.”

“SparkCharge’s success is testament to the power of the Syracuse University entrepreneurship and innovation ecosystem, and it was a delight to watch the professionalism with which Josh presented his company and represented our university, and the enthusiastic reception he received from an audience of peers and experts,” said David Seaman, dean of the Syracuse University Libraries and PI for the Blackstone LaunchPad program.

Josh received early and continued support from the faculty in the iSchool’s minor in Information Technology, Design, and Startups (IDS), and from the professional mentors in the Syracuse Student Sandbox.  He has made full use of the services of the Blackstone LaunchPad in Bird Library since it opened last year, and now serves as Entrepreneur in Residence for the Couri Hatchery in the Falcone Center, Whitman School of Management.  His research and development offices are located at the Syracuse CoE, where he is creating two Syracuse CoE Fellows positions for students who are interested in exploring renewable technologies and energy systems.  Aviv holds two degrees from Syracuse University, a master’s degree in information management from the iSchool (2017), and a bachelor’s degree in economics from the Maxwell School (2015).

“The opportunity to interact with Techstars founders and program managers was priceless, as was connecting with experts who are part of Blackstone’s unparalleled global network,” said Aviv.  “This opened doors that will accelerate our growth trajectory, and winning this competition will help us more rapidly scale.  It builds on the solid startup foundation we received through Syracuse University’s amazing innovation ecosystem.”

SparkCharge will use the funds toward testing and certification of its EV battery-pack charging unit, to move from prototype to first-run manufacturing.  The company employs five, three of whom are Syracuse University alumni, and one is a Syracuse University student.  Aviv has now raised $135,000 for his venture, and was the recent grand prizewinner of the New York State Business Plan Competition, also winning first place in the clean technology division.  He is also a winner of the Panasci Plan Competition and the RvD iPrize, as well as the Syracuse CoE Innovation Fund.

Techstars is a worldwide network that inspires, educates and connects entrepreneurs, accelerating innovation and startup activity.  The Techstars accelerator portfolio includes more than 1,000 companies with a market cap of $10.2 billion.